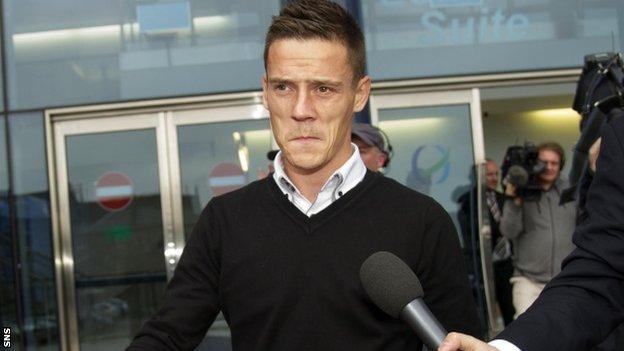 Rangers midfielder Ian Black has been given a 10-match ban after admitting to a breach of Scottish FA regulations on football betting.

The 28-year-old will serve an immediate three-game ban, while seven matches are suspended until the end of the season.

Black was accused of gambling on 160 matches over a seven-year period, including betting against his own team on three occasions.

The SFA has a blanket ban on footballers betting on any matches.

Rangers Football Club notes today's verdict by the Judicial Panel which has imposed a 10-match ban and £7,500 fine

A third charge of "betting on a further 147 football matches" resulted in a censure.

It is the first time a player in Scotland has been punished for breaking gambling regulations.

Black played for Inverness CT, Hearts and Rangers in the period concerned.

The midfielder, capped once for Scotland, will miss games against Arbroath, Queen of the South and Forfar and will be free to return for the League One meeting with Stenhousemuir on 28 September.

The suspended penalty will only be triggered if the player commits a further breach of disciplinary rules 22 or 23, which apply to betting.

Fraser Wishart, chief executive of the players' union PFA Scotland, said he did not have an opinion on the punishment handed to Black, but insisted it presented an opportunity for all stakeholders in the Scottish game to review and bolster the rules regarding players gambling on football matches.

"If there is any good outcome from this, then I think it's raised the spectre of this regulation," said Wishart.

What it does do, it gives us the opportunity to have an open, frank and adult conversation about the current regulations

"We, as a union, have been talking to players for the last two or three years during our normal club visits about the rules on betting, so at least it's opened it up and it's in the public domain.

"What it does do, it gives us the opportunity to have an open, frank and adult conversation about the current regulations.

"I'm not taking any view on it, but I think it's an adult conversation, let's be open - let's grasp the nettle and see whether we can come up with something that's appropriate for the game."

In a statement, the Ibrox club said: "Rangers Football Club notes today's verdict by the Judicial Panel which has imposed a 10-match ban and £7,500 fine on Ian Black.

"Three of the matches will be served immediately - meaning the player would miss games against Arbroath, Queen of the South and Forfar - and a further seven games will be suspended until the end of the 2013/14 season.

"Black would be free to return to action against Stenhousemuir on Saturday, September 28, 2013."