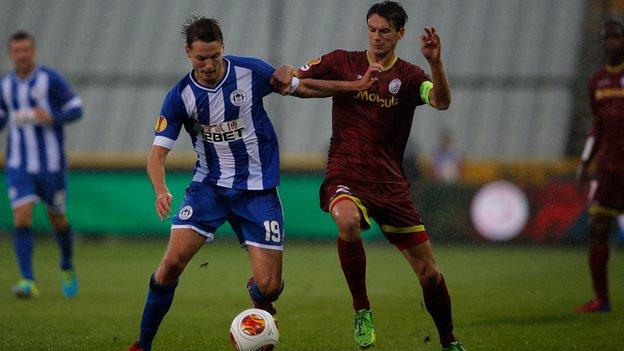 Wigan Athletic battled to a draw against Belgium's Zulte-Waregem in the first European tie in their history.

A brilliant Chris McCann block on the goal line late on saved the FA Cup winners in a match short on chances.

Wigan goalkeeper Scott Carson did superbly to deny Ibrahima Conte in the first half as Owen Coyle's side absorbed pressure.

Zulte's Habib Habibou went close after the break as the visitors earned a Europa League point.

The match took place in front of a small crowd at the Jan Breydel Stadium in Bruges, with Zulte's own stadium not deemed fit for European football.

The Latics were the only side in the draw without any continental experience. Their opponents - who finished second to Anderlecht in Belgium last season - were eliminated from this year's Champions League at the qualifying stage.

Since qualifying for the competition with a dramatic FA Cup final win over Manchester City in May, Wigan have lost their Premier League status and former manager Roberto Martinez.

Chairman Dave Whelan has said promotion from the Championship was this season's priority, but ahead of the game Coyle said his side were determined to mark the historic occasion with a win.

Facing three games in six days, the Wigan boss made seven changes to the side that lost at Leicester on Saturday and fielded a starting line-up containing five players with previous European experience.

And in testing conditions on a wet night, the visitors almost made the perfect start, when James McArthur's volley from 20 yards grazed the outside of the post after three minutes.

Achieved their highest ever finish in the 2012/13 season - coming second in Belgium's top flight to Anderlecht, but their ground does not meet UEFA requirements, prompting Europa League matches to be played in Bruges.

Hazard's side, managed by Franck Dury, grew into the half and went close when James McClean headed against his own crossbar, before Carson made a telling contribution to deny Conte.

The former Liverpool goalkeeper's diving parry from a close-range strike kept the sides level at the break, but the 28-year-old almost turned villain in the second half when his missed punch led to striker Habibou heading wide.

Ryan Shotton - making his debut after a deadline day move from Stoke - went close with a clever flick, but Wigan's attacks were sparse in the second period as the Belgian side chased three points.

Habibou just failed to convert Jens Naessens drilled cross from inside the six-yard box and, even though Coyle introduced fresh legs, Zulte continued to test the Championship side's defensive credentials.

Defender Karel D'Haene, who scored for Zulte against Newcastle in 2007, was doggedly denied by McCann when the former Burnley man threw himself in front of his goal-bound effort.

Wigan threatened to forge openings on the break with the introduction of Marc-Antoine Fortune, but when Conte blazed a late chance over, a first European point in their 81-year history was secured.