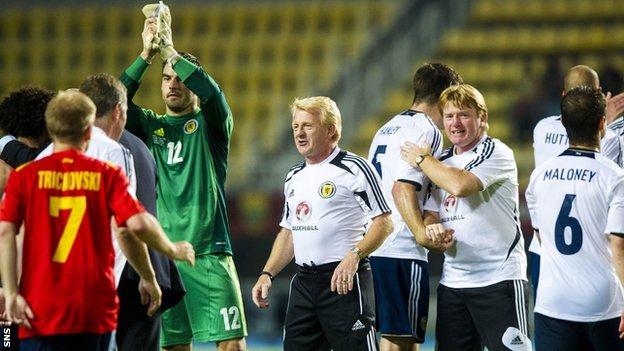 Whisper it but I think Scotland are going places.

Sadly Brazil's not one of them. That destination was wiped off the departures board a depressingly long time ago as World Cup qualification hopes fizzled out early on.

But finally, I get the feeling - and you can let me know if you share it - that our national football team is heading in the right direction.

Don't get me wrong, there's still a long way to go in the rehabilitation process. But we now look, even if we're not on the road to Rio, as if we are on the road to recovery.

And, on that subject, my television studio chair is still recovering after being used as a launch pad to celebrate

It was a magic moment in Macedonia and it felt as if it carried some serious significance for Scotland's revival.

Gaffer Gordon Strachan wants both performances and results. Shaun Maloney's brilliantly-flighted free-kick ensured the latter but he was only one part of a top team showing which delivered the first part of the double deal as well.

It wasn't a flash-in-the-pan performance which made the Macedonians, in the first half, look pretty ordinary. There's been a clear Scotland progression over the last few games as Strachan and his players have started to understand each other.

That bonding is crucial because, with the best will in the world, the manager can't pick from a pool of outstanding individual talent. Only with teamwork, tactics, discipline and determination can Scotland succeed.

Those qualities have been evident in an outstanding win in Zagreb and an encouraging display despite defeat at Wembley. We weren't in the same ballpark as Belgium at Hampden but that shouldn't be too surprising.

And then there was Macedonia and the three points which lifted Scotland off the bottom of Group A. We could still end up at the wrong end of the table - other results can decide that - but I'm more interested in the start of the next qualification campaign than the end of this one.

Getting to Euro 2016 in France - the scene of our last major finals appearance more than 15 years ago - is clearly a big challenge but Scotland are in much better shape now to tackle it.

Charlie Mulgrew has emerged as an international player. His development over the last few years has been staggering and he's been a revelation in the holding midfield role alongside club captain Scott Brown.

Ikechi Anya is a big bonus and a massive credit to the search party who tracked down the Watford wide man's Scottish roots. His pace gives the team something it badly needs.

It feels like Steven Naismith has been rediscovered. Having struggled to make a big impact at Everton, his Skopje showing as a solo striker smacked of game intelligence.

He deserves to play in the final group game against Croatia, although he might have to move if Steven Fletcher is ready to return up front. Suddenly the squad looks a whole lot stronger.

My main concern is the lack of balance to the back four with Steven Whittaker out of position at left-back. Lee Wallace would be the natural replacement with Whittaker possibly switching to the other side to take over from match-starved Alan Hutton.

How's this for a Scotland team to start at Hampden on 15 October (I'm assuming Allan McGregor will be fit to return)?

Scotland have taken some impressive steps forward in Strachan's seven games in charge. Let's hope he can maintain momentum.