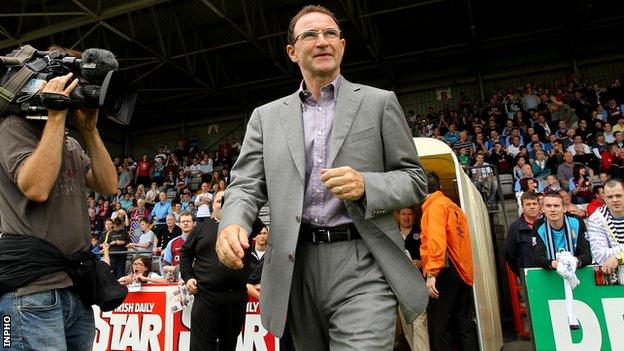 The former Celtic, Sunderland and Aston Villa manager, told BBC NI last week he was keen to get back into management.

However the former Northern Ireland captain has yet to declare an interest in the vacancy, following Trapattoni's departure on Wednesday.

O'Neill, capped 64 times by Northern Ireland, is available after being shown the door by Sunderland in March.

It is understood the 61-year-old was not contacted before the Republic's 1-0 defeat by Austria in Vienna on Tuesday.

McCarthy is another contender who would enjoy popular support, having guided the country to the 2002 World Cup finals in Japan and South Korea.

The current Ipswich boss had more than six years in charge of the country and also played for the Republic in the 1990 World Cup.

Hughton was assistant to former Republic of Ireland manager Brian Kerr and won 53 caps for the Republic.

He established a good reputation as a manager at Newcastle, whom he guided back into the Premier League following relegation, and has since impressed at both Birmingham and current club Norwich.

Former Manchester United and Republic of Ireland skipper Keane is also being linked as a possible successor to Trapattoni. He cut his teeth as a manager at Sunderland, winning promotion to the Premier League at the first attempt, and later guided Ipswich to the semi-finals of the Carling Cup.

Steve Staunton, who won 102 caps for the Republic and managed the team on their failed mission to qualify for Euro 2008 before losing his job, was not surprised that Trapattoni was relieved of his duties.

But he said expectations that the Republic should be qualifying for major tournaments on a regular basis were "unrealistic" given the small pool of players available for selection.

He threw his weight behind those calling for O'Neill to take over.

"He's got more experience than anybody out there so it wouldn't be a bad shout," he said.

"Who knows what the FAI have in mind, but Martin would be up there high on the list.

"I would like to see an Irishman get it or somebody who's from these islands, who knows what the Irish boys are about and knows the mentality."