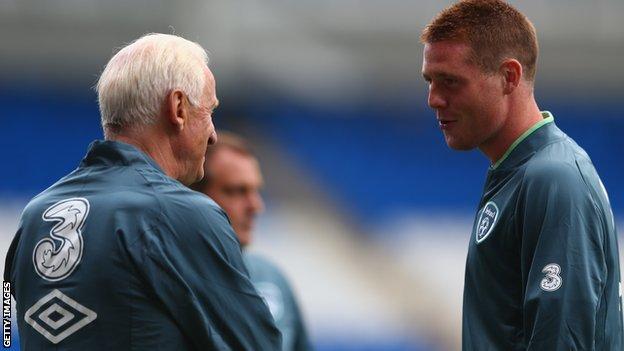 James McCarthy has thanked departing Republic of Ireland boss Giovanni Trapattoni for helping his move from Wigan to Everton go through.

Trapattoni, who left his post with the Republic on Monday, allowed McCarthy to join up late with his squad to complete his switch on transfer deadline day.

"He told me I could report on Tuesday," said the 22-year-old midfielder.

"I'm thankful that he allowed that to happen. At such short notice it might not have happened."

I enjoyed my four years Wigan... but this is a new chapter in my career and life and one that I'm really excited about

McCarthy added: "It took me a while to get into the [Republic] team and thankfully I got in.

"He [Trapattoni] stuck by me and gave me my chance. He's been good for me. I'm disappointed to see him go. I'm gutted, to be honest. The players enjoyed working under him."

McCarthy made the the move from Wigan, who won the FA Cup last season but were relegated from the Premier League, for £13m just before the transfer deadline of 23:00 BST on Monday, 2 September.

He now wants to earn a first-team spot with the Toffees and help them secure European football.

"The move was touch and go all night," he said. "It was such a late deal and thankfully it went through at about [22:50] and I'm glad to be here.

"I'm not going to go straight in. I need to work hard both on and off the pitch. I'll take things a day at a time and if I get my chance I'll try to prove that I can play.

"I enjoyed my four years Wigan. It helped me so much and I'm thankful to them, but this is a new chapter in my career and life and one that I'm really excited about."

He added: "It is such a huge club. You want to play European football and why not? We have got a really good squad here and we will try to push on this season."