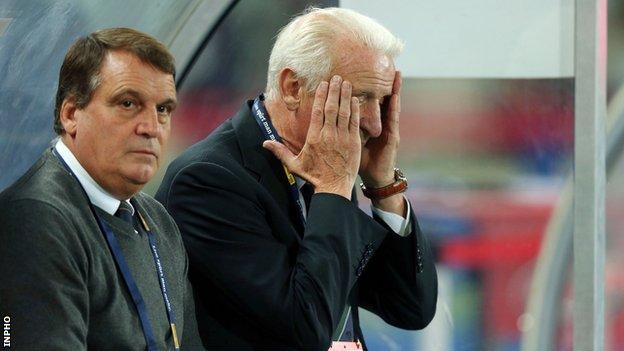 In 2008, Giovanni Trapattoni had been hailed as the man to revive the Republic of Ireland after a depressing spell under Steve Staunton.

The Football Association of Ireland declared they had appointed the best manager in Europe.

At considerable expense, the experienced Italian was recruited in an ambitious attempt to revive the nation's footballing fortunes.

Many would argue Trapattoni fulfilled his job spec, and the man himself is adamant he leaves the Republic in much better shape than he found them.

When he was appointed in February 2008 things were at a low ebb.

The Republic had failed to make the Euro 2008 finals and the gamble in appointing former Liverpool defender Staunton, an experienced player but managerial novice, had not paid off.

The hiring of a man who had won league titles in four different countries was seen as quite a coup for the FAI.

It may have required the financial backing of businessman Denis O'Brien, but officials wore satisfied smirks as they unveiled the new boss.

Trapattoni became one of the world's highest paid managers.

He said he could take the Irish to the World Cup finals in 2010 and came close to doing so.

The Republic were unbeaten in a group which included Trap's native Italy, only to lose a controversial play-off to France who squeezed through with the help of Thierry Henry's infamous handball in Paris.

The play-off route was kinder to Ireland in the qualifying campaign for Euro 2012 as they cruised past Estonia over the two legs.

The Republic's only previous appearance in Euro finals had been in 1988. But, in making it to the last 16, Trapattoni's men suddenly seemed out of their depth.

I followed the Republic as they travelled to Poland and you could sense they were concerned by the tough group in which they found themselves.

Sure enough, only one goal was scored and no points were gained as the outclassed Irish fell to defeats by Croatia, Spain and Italy.

No shame in that, maybe, but critical observers felt Trapattoni's job was done and it was time to move on. Many had become weary of the manager's tactics which were regarded as negative and lacking in flair.

His team selections frustrated supporters who yearned for some midfield creativity, in the shape of Wes Hoolahan, who was consistently overlooked by the Italian.

But the FAI had already rewarded Trapattoni for Ireland's Euro qualification, granting him a new contract to take in the qualifying series for the 2014 World Cup.

So, they kept faith with the man whose birthday fell on St Patrick's Day - but it almost endedlast October when the Republic were thrashed 6-1 by Germany.

The Germans were seen as clear favourites to win qualifying Group C with the real contest in the race to Rio being for a place in the play-offs.

That race ended on Tuesday with the Republic losing in Austria, four days after defeat at home by Sweden. It left them fourth in the group and out of the running.

If there was any acrimony in the predictable parting of the ways, it was concealed behind closed doors.

Trapattoni had said he wanted to carry on, but at the same time sensed he had reached the end of his Irish adventure.

On BBC Radio 5 live, former Republic player Kevin Kilbane said: "There has been a feeling in Ireland that he had been on borrowed time since the Euros.

"His record at home is worse than Steve Staunton's, who got a lot of stick.

"Away from home he got us solid, difficult to beat and that is what he did with the Irish team that was very good.

"It was what needed to be done after Staunton left. The style was one negative factor which a lot of people didn't like."

Whether it was case of an Irish public blinkered by the Charlton years, demanding too much, or Trapattoni not delivering, is a matter for debate.

However, I have met many Irish supporters since Trap's departure, and have yet to meet one who believes he should have been kept on.

I personally found him charming and a charismatic man who glowed when talking about football - but it feels like the end and it is the right move for all concerned.