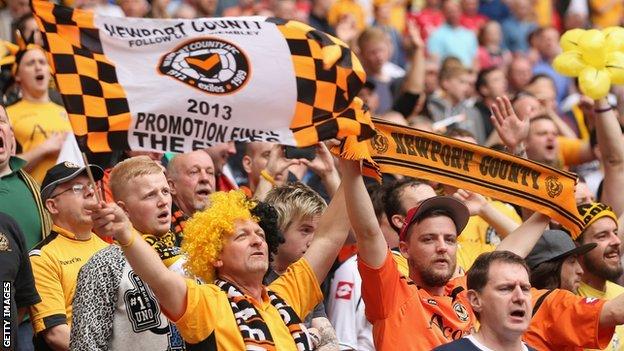 Newly-promoted Newport County are one of a host of League Two clubs reacting to the current economic climate in an attempt to attract more young fans.

The BBC Sport Price of Football found the Exiles offer a range of junior incentives, including free entry to those aged under six.

Accrington Stanley, meanwhile, made every year six pupil in the local area eligible for a free season ticket.

Other offers in the division include cut-price concession tickets and family offers.

Accrington chairman Peter Marsden told BBC Sport: "It's well documented that we don't attract the biggest crowds in the league but over the last few years the average attendance has steadily crept up.

"We know that you can't change peoples' allegiances overnight but hope that once someone has come once they will enjoy it so much that they'll come back.

"The pricing is part of our drive to appeal to football supporters in general. We believe that coming to Accrington Stanley provides excellent value for money in difficult times for everyone and hope the people of the area agree with us."

AFC Wimbledon have raised their age range for junior prices to include under-18s, who pay just £4 for all home league matches on the terraces at Kingsmeadow, while at Bristol Rovers a full paying adult can be accompanied by up to three children for free.

Chesterfield give away 900 tickets for each home game to schools and local community groups, Mansfield offer a family ticket for two adults and two children for £40 and Portsmouth's junior fans pay just £5 in any section of Fratton Park, while under-10s are entitled to a free season ticket in the family section if accompanied by an adult.

At Newport, the club allow families to save up to £75 on the cost of season tickets, and offer match-day and season-ticket discounts for children up to the age of 16.

The club's fans' liaison officer Jordan Royal told BBC Sport: "Newport recognise that in the current economic climate, football clubs must do all we can to promote cost-effectiveness for the next generation of football fans.

"In order to attract these young supporters to Rodney Parade, we believe that it is right that no child under the age of six will be charged to watch Newport."

Plymouth, who won family club of the year at the 2012 Football League awards, do not sell season tickets as such, but instead invite people to become members of the club. They offer a ticket for one adult and one child for £23 if purchased before the day of the game and also have concessionary prices for those serving in the military.

Elsewhere, Fleetwood offer free season tickets to all under-16s, Southend have a family season-ticket card allowing one adult and one child under 16 to watch home matches for £350 and York let under-16s into Bootham Crescent for £8.

At Hartlepool, under-19s pay just £75 for a season ticket, £3.26 per match. Burton have a Junior Brewers scheme with the option to buy a season ticket for as little as £30.

Rochdale's young fans have several options, with under-7s offered a free season ticket and supporters aged 16 or under eligible for an £89 season ticket.