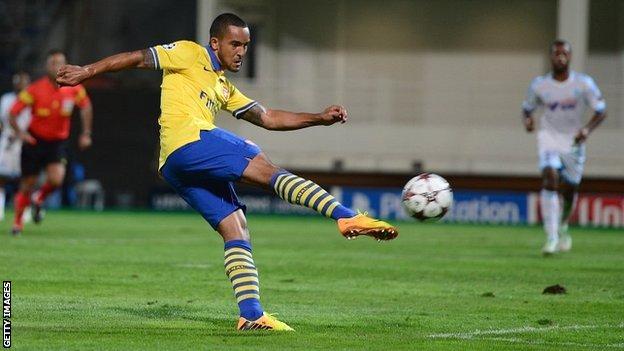 Aaron Ramsey continued his fine form to help earn Arsenal a record 10th successive away win as they strode past Marseille in the Champions League.

Ramsey's goal six minutes from time settled the contest when he collected Kieran Gibbs' ball to fire in from 16 yards for his sixth in seven games.

Theo Walcott's volley midway through the second half gained control of the game after some early scares.

A stoppage-time penalty by Marseille's Jordan Ayew made little difference.

Ramsey brought down Andre Ayew for the spot-kick, with the Marseille forward appearing to make the most of any contact.

But it did little to spoil another fine result for the Gunners, who picked up their sixth successive win since losing on the opening day of the Premier League to Aston Villa.

Just before Walcott's goal, which came after a mistake by Marseille full-back Jeremy Morel, Gibbs cleared the ball off the line after a slice by fellow Gunners defender Per Mertesacker.

The left-back and Ramsey were the visitors' most impressive performers as Arsenal repeated the same result that they achieved at the Stade Velodrome in the Champions League two years ago.

That night, Ramsey scored a late winner, but his development is reaching new heights and he scored three goals in a play-off tie victory over Fenerbahce that ensured Arsenal's 16th successive Champions League campaign.

In Marseille, he crafted much of Arsenal's best play with clever running and smart distribution though, at times, Arsenal appeared unbalanced in their formation with Jack Wilshere employed on the left side of a front three behind striker Olivier Giroud.

That gave the French side plenty of space down the right side and Arsene Wenger's team will not be able to afford the same luxuries to upcoming Group F opponents Napoli and Borussia Dortmund.

With Italian side Napoli winning 2-1 against last season's finalists from Germany, this result took on even more importance and the Gunners may need to be tighter in midfield when they host Rafael Benitez's side in their next European match.

Deadline day signing Mesut Ozil made his European debut for the Gunners after an impressive display against Sunderland on Saturday, but he was a flitting influence in the first period.

Walcott had the visitors' best chance before the break when he fired straight at Steve Mandanda despite having his shirt pulled as he bore down on goal, but Marseille should have gone into the break in front.

France international Mathieu Valbeuna was easily the most creative force in the first period and twice went close.

After an uninspiring first period, the game improved in the second as chances began to stack up.

Rod Fanni shot wide just after the interval before Dimitri Payet, finding room on the right wing, had a stinging effort saved by Wojciech Szczesny.

At the other end, Gibbs played a lovely one-two with Ozil before having a shot saved by Mandanda and also saved Mertesacker's embarrassment as the Germany defender returned to the team after illness.

Shortly afterwards, Morel failed to clear Gibbs' cross as Walcott struck his first goal of the season, and when Ramsey signalled his growing influence on the team the victory was secured.

The late penalty did little to dampen Arsenal's delight at the final whistle.