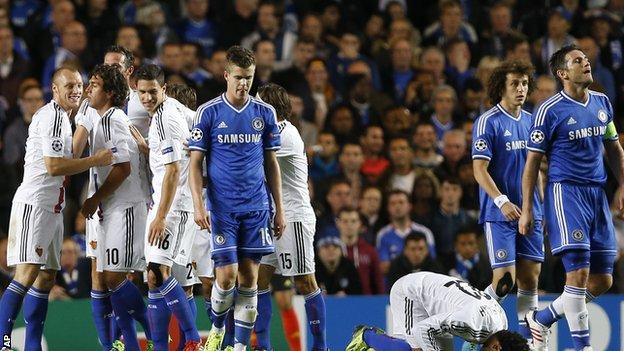 Oscar put the home side ahead with an angled first-time shot into the bottom corner at the end of the first half.

And the home crowd was left stunned as skipper Marco Streller won the Group E opener for the visitors with a late near-post header.

Chelsea have made their worst start to a Premier League season in a decade after drawing with Manchester United and losing to Everton in their last two matches.

But the Blues, who have won the Champions League and Europa League in the past two seasons, expected a change in fortunes as they returned to European action.

The shock loss came exactly six years after Mourinho took charge of the final match of his first Blues spell, a 1-1 draw against Norwegian side Rosenborg.

The Portuguese, who returned from Real Madrid in the summer, has played down his youthful squad's chances of winning the Champions League - describing them as "young eggs who need nurturing".

"When Mourinho was winning trophies at Chelsea last time around, he knew how to get results. But I think the game's changed. Players like Hazard and Oscar need to be released to go and play, go and hurt teams.

"I've watched them this season and they seem a little rigid. It's like they're in a straitjacket. You don't see Ronaldo or Messi tracking back.

"I can't believe Mata can't get into the team because he's a man who can open doors."

But the team he selected on Wednesday could hardly be described as inexperienced. Including £30m debutant Willian, Chelsea dominated possession in the opening hour, but only had Oscar's strike to show for it.

The home side forced six corners in a dominant first-half display, without being able to force Basel goalkeeper Yann Sommer into a serious save.

Sommer did find himself in trouble when he fumbled an Oscar set-piece under pressure from Gary Cahill and home debutant Samuel Eto'o in his six-yard box, only to be rescued by referee Daniele Orsato who generously awarded a foul against the home players.

Chelsea were finally rewarded just before the interval when Oscar fired a first-time shot into the bottom corner after latching on to a perfectly weighted throughball by Frank Lampard.

The Brazil midfielder also hit the crossbar after the break as Chelsea searched for the security of a second goal. But it did not arrive and Basel, dangerous on the counter-attack throughout, punished their hosts.

Salah, who scored on the same ground when the teams met in last season's Europa League semi-final, had repeatedly tested Chelsea left-back Ashley Cole and it was no surprise that he was the man to level the scores.

Basel's victory was the first win by a Swiss side in 20 competitive visits to England. The previous winners were FC Luzern who triumphed 2-0 at Tottenham in the 1995 UEFA Intertoto Cup.

Neat build-up from the visitors ended in Streller picking out the unmarked Egypt international, who curled a low left-foot shot beyond Cech.

Mourinho introduced Juan Mata and Demba Ba as the Blues pressed for a late winner, but they only looked more vulnerable as Basel grew in confidence.

The home side scrambled clear after midfielder Fabian Schar burst through the middle, before team-mate Marcelo Diaz had a shot blocked.

But the Swiss side continued to press and grabbed the decisive goal when Streller escaped two Chelsea markers to head home with eight minutes to go.

Basel and German side Schalke, who earned a comfortable 3-0 win against Romanian visitors Steaua Bucharest, top Group E after the opening round of matches.