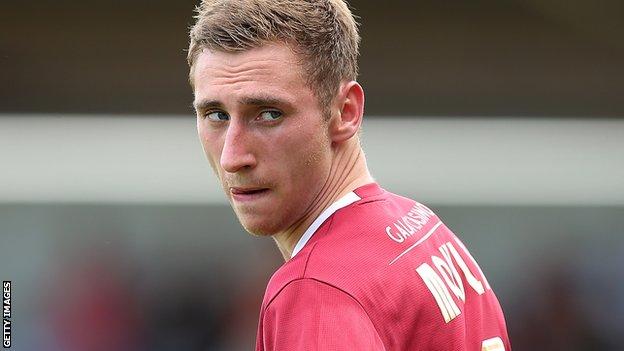 Wes York put Boro ahead from close range only for Hereford to level on 53 minutes when Rod McDonald nodded home a right-wing Kingsley James cross.

McDonald hit the bar for the Bulls with a minute to go but Nuneaton held on.

Boro's ninth game without defeat takes the club top of the Conference for the first time since the autumn of 1999 in their days at Manor Park under Brendan Phillips.

They move two points clear of early pacesetters Cambridge United, who also maintained their own unbeaten record by drawing at Alfreton.

The two sides are due to meet at the Abbey Stadium next Tuesday night, by which time Boro will have hosted Salisbury this Saturday, while Cambridge are at home to Forest Green.

Hereford's third consecutive defeat drops them to 16th in the table - just four points above the drop zone.

"It's working well at the moment and we're enjoying our football.

"Our defence haven't given too many away and we're nicking goals at the other end.

"Football's all about confidence and a lot of our players have a spring in their step right now. It's up to me to make sure that continues."

"We're not going to get any plaudits at the moment. I can praise the lads for their effort and their endeavour but we've got to be better with the ball.

"And we've got to cut out the mistakes and very soon. That's four defeats out of five now.

"It's not a panic button but we've got to make sure we're disciplined in what we do."