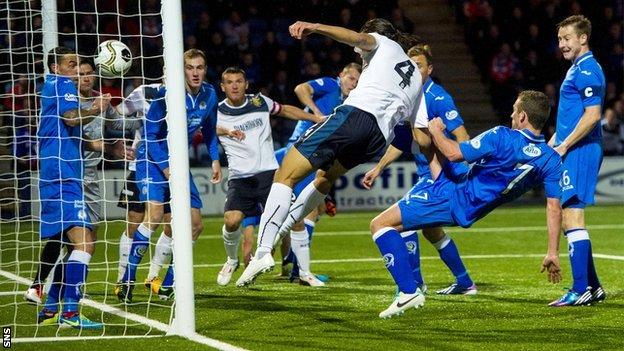 Rangers progressed to the semi-finals of the Ramsdens Cup and ended Queen of the South's defence of the trophy.

Bilel Mohsni fired the visitors in front from close range after Michael Paton had threatened for Queens.

The home side had Chris Higgins sent off for two bookings and Ally McCoist's side soon added to their lead.

Queens knocked Rangers out of last season's tournament and the Dumfries side set about repeating that feat with some corner kicks early on, Paton's header from an Ian McShane delivery blocked on the line by goalkeeper Cammy Bell.

However, it was a set piece at the other end that led to the opening goal.

Arnold Peralta's corner from the left was headed back across goal by McCulloch and Mohsni volleyed in for his second goal in as many games.

Peralta then tested keeper Calum Antell with a fierce drive from outside the box and Daly's volley from Steven Smith's diagonal pass just cleared the Queens crossbar.

But Rangers were not having it all their own way with Paton's dipping free-kick narrowly missing the bar.

The Doonhamers' front two combined to good effect when Paton crossed for Lyle and Bell had to react quickly to clutch the header on his line.

Queens maintained their determined approach in the second half but found opportunities harder to come by.

And the task facing Jim McIntyre's side became all the more difficult when Higgins picked up a second caution for a foul on Steven Smith.

Law's delivery from the resulting free-kick was converted by Daly and McCulloch netted his seventh goal in three games shortly after.