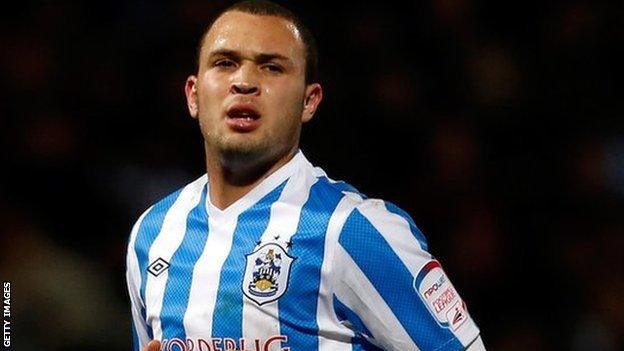 A stunning 35-yard goal from defender Joel Lynch helped Huddersfield to a narrow victory over Charlton.

The Wales international fired into the top corner on 65 minutes to add to James Vaughan's 45th-minute opener.

Chris Powell's visitors dominated the closing stages but were unable to snatch an equaliser.

The two sides were playing each other for the second time in just three weeks, having met at the same ground in a thrilling Capital One Cup second-round tie that Huddersfield edged 3-2.

The second half of this encounter lived up to the excitement of that match, but the first period was short on quality.

Huddersfield are unbeaten on their own turf, and have not lost in seven league games at the John Smith's Stadium, stretching back to the visit of Hull on 30 March

In fact, it was not until the 45th minute that either side managed to register an attempt on target, with Charlton's Simon Church heading straight into the hands of goalkeeper Alex Smithies.

Huddersfield responded with their first attempt on goal a minute later - and it broke the deadlock.

Charlton, helped by some wayward defending, provided much more of an attacking threat after the restart and could count themselves unlucky when an on-target Johnnie Jackson effort struck team-mate Marvin Sordell in the area and deflected harmlessly wide.

Instead, Huddersfield extended their lead as Lynch's perfectly placed long-range strike flew beyond the despairing dive of Charlton keeper Ben Hamer and into the top corner.

The visitors, yet to win away from home this season, set up a tense finish through Stewart's powerful drive but despite dominating late on, they could not find a second goal.

"It was an even game I think - the difference was a wonder strike from Joel Lynch. I am surprised it did not go through the net he hit it so well.

"We did well in spells. It was a little bit pedestrian but it is early days, you are not going to get the finished article straight away.

"I thought we were better in the second half and controlled it more. I am pleased with the three points because it gives everyone a lift."

"It was a patchy first half from both teams but conceding the goal when we did put us on the back foot. It was a good response from us in the second half but you can't legislate for a wonder goal.

"We were certainly the side I felt pushed more in the second half but Huddersfield saw it out. However you earn your points in the Championship, they are always well earned.

"It is frustrating. I've had a good response from the players recently after an indifferent start. I'll take some positives from the defeat. As long as we recover and don't get too downhearted about this evening it will be all systems go for Millwall on Saturday."