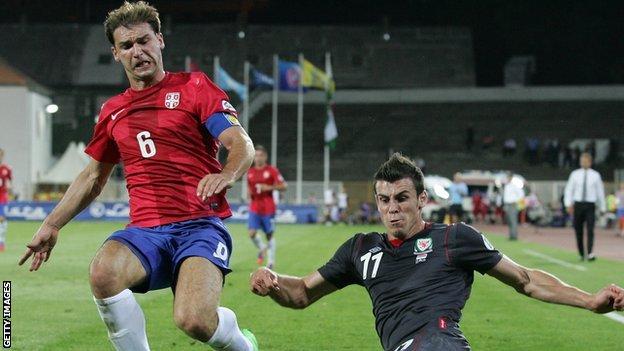 Serbia captain and Chelsea defender Branislav Ivanovic is confident that even if they face Gareth Bale in Tuesday's 2014 World Cup qualifier they can deal with the threat from Wales.

If involved, Bale would come off the bench amid

"We have to be ready to face a side with him or without him, and we are," said Ivanovic of Bale, Real Madrid's £85.3m world record recruit.

"It's difficult to stop him - he is a player who is always hard to mark."

Bale, 24, took a full part in eve-of-Cardiff-clash training following a scan on a groin strain that ruled him out of Wales' 2-1 defeat by Macedonia on Friday.

Ivanovic added: "Bale is one of the best players in the world, everyone knows that, but it is not just him.

"There are other great players in the Wales squad and they have played really well in some games.

"Bale is one of their main players, but we do not know whether he will play or how long he will play, but we have to be ready to face a side with him or without him, and we are.

"It's difficult to stop him, he is a player who is always hard to mark.

"But for us it is important to play as a team as one individual cannot make that much of a difference over a game.

"I expect him to play some part. It has been a very interesting period for him.

"He is an exciting player and he will be motivated to be back on the football field, but we are ready for that.

"It is a pleasure to face the best players."

Wales lost 6-1 to Ivanovic and his team-mates in September, 2012, in Group A in Novi Sad and boss Chris Coleman says it was one of the worst nights of his managerial career.

"That was the darkest moment for me in charge of this country and possibly in my managerial career," said Coleman.

"It wasn't a good feeling but we have turned a corner since then and have done quite well since.

"They are a good team but it is still there for us to go and finish high in the group."

"They will be motivated looking back at the 6-1 defeat the last time we played. We know that," said Ivanovic.

"They are at home; it has been a long time since the last game and it will be tough, but we are well-prepared."