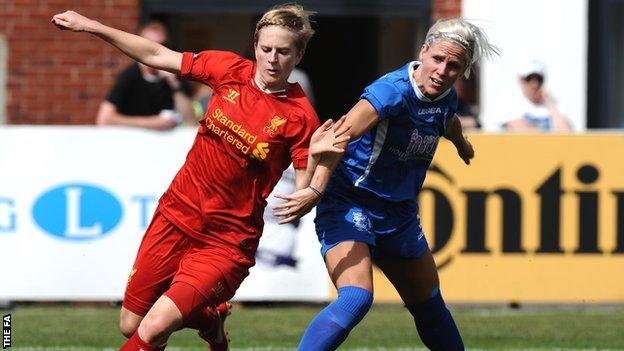 Liverpool striker Natasha Dowie has earned a recall to the England women's squad for the upcoming World Cup qualifiers against Belarus and Turkey.

Interim boss coach Brent Hills picked Dowie after she was left out of Euro 2013 by former boss Hope Powell despite being top scorer in the league.

Arsenal winger Danielle Carter has been handed her first call-up for the matches on 21 and 26 September.

But her team-mate Kelly Smith misses out because of a calf injury.

Chelsea midfielder Dunia Susi, who was a member of the England squad at Euro 2013 which finished bottom of their group in their worst European performance since 2001, has not been included in the squad.

Dowie, 25, is now the Women's Super League joint top scorer with 10 goals, firing Liverpool to the top of the table with two games remaining. Her last of three caps came in September 2011 against Serbia.

Carter, 20, has netted six times in 11 games for the Gunners and has represented her country at an U17 and an U20 World Cup.

Hills said: "I've been impressed with what I've seen from those two this season.

"I know them from the Under-23s, I've spoken to their club managers and I feel that they've made a strong case to be included."

Hills, the Under-23 head coach and former assistant manager to Powell, will take charge of the opening two qualifiers as England set out on the road to Canada 2015.

He added: "We all realise we underperformed severely in the summer, but you don't become a bad player overnight.

"This is a chance for the players to show they can bounce back. Talent always rebounds.

"The Euros are done and dusted now. We've already analysed it as staff and players and I don't think we should spend an inordinate amount of time dwelling on it.

"We need to move on and get these qualifiers off to a winning start."

Both games will be live on the BBC.