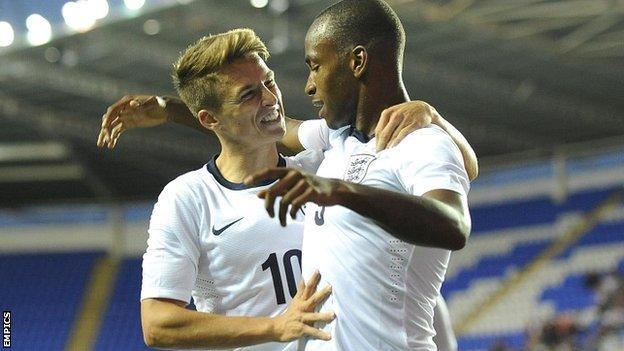 Saido Berahino scored a second-half equaliser as Gareth Southgate's England Under-21 side drew 1-1 with Finland in their European Championship qualifier.

It was an eventful second game for new U21s boss Southgate, who saw captain Andre Wisdom sent off in Tampere.

From asylum seeker to the Premier League

Saido Berahino arrived in the UK from war-torn Burundi as a 10-year-old with his mother and siblings, who were granted political asylum

Finland, who started brightly, took the lead in avoidable circumstances for England when Butland was rather embarrassingly caught out of position by Yaghoubi's whipped, long-range free-kick.

The Stoke goalkeeper then tipped Robin Lod's effort over the bar before James Ward-Prowse had England's first chance of note.

The Southampton man, making his second start for the Under-21s, again came close on the stroke of half-time, only to be denied by Fulham goalkeeper Jesse Joronen.

When play resumed, Butland was relieved to see Tim Vayrynen fire over after being beaten to the ball before substitute Harry Kane was denied moments after coming on.

Southgate's side pushed for a winner but fell just short as they played the final 16 minutes without skipper Wisdom, who was sent off following an altercation with Vayrynen.