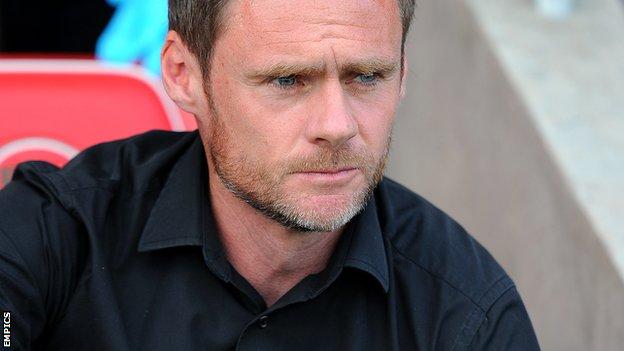 Fleetwood Town manager Graham Alexander has said he is not afraid to change a winning team after the Cod Army beat Torquay 4-1 on Saturday.

Alexander made two alterations to the team that had won impressively at Tranmere in the Football League Trophy.

"There are no favourites and no fringe players," he told BBC Radio Lancashire.

Antoni Sarcevic scored twice in Fleetwood's 4-1 win over Torquay on Saturday. His only other Football League goal came on his league debut for Crewe at Northampton in February 2011.

"Every single player will contribute to this season. Every player in my squad is of equal value and we rate them as much as each other."

Sarcevic, a netted his first goals for his new club against the Gulls.

"I had a week out through injury, which was frustrating, but it shows the faith that the manager has got in me to put me straight back in," said the former Crewe man.

"There's nothing better than repaying him with two goals and I'm happy to get off the mark."

Fleetwood have justified their tag as being one of the favourites for promotion from League Two with a good start to the campaign, taking 12 points from their first six matches.

And Alexander is mindful of the problems arising from a 46-game league season, making him even more delighted with the way his entire squad have started the season.

"The response from the players that didn't play on Saturday was fantastic," added the former Preston, Burnley and Scotland defender.

"They're true professionals, true men, and supporting the players that are out there. That will only stand us in good stead over what will be a long season.

"As long as they train as well as they have been doing and show the right spirit, we'll stick with them."