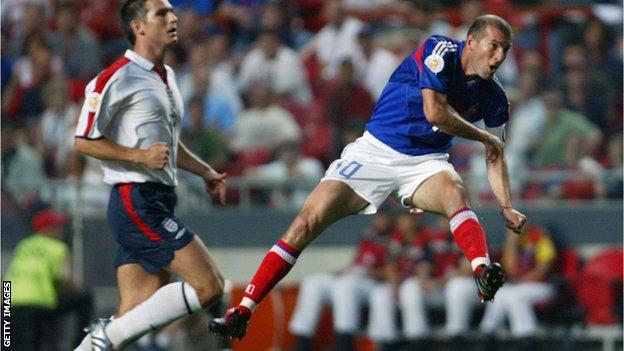 The Chelsea player is set to win his 100th cap in England's World Cup 2014 qualifier against Ukraine in Kiev.

Zidane told the BBC's Match of the Day Kickabout: "The one that is standing out and is really a leader is Lampard."

England go into Tuesday's game level on points with Montenegro at the top of Group H, and a point ahead of Ukraine, with two matches to play.

The top team will automatically qualify for the finals in Brazil, with the runners-up going into the play-offs.

Yet 41-year-old Zidane, who is now assistant coach and sporting director at Real Madrid, believes Roy Hodgson's men will make it to Brazil.

"England are going to be there but it's going to be complicated," the three-time world footballer of the year said.

"Every team has a chance when they are in the final rounds and England is one of them. England is a great team as a whole."

During his career, he was named the best player in France's Ligue 1, Italy's Serie A and Spain's La Liga.

* Zidane was speaking as an ambassador for the Danone Nations Cup World Final for 10- to 12-year-olds.