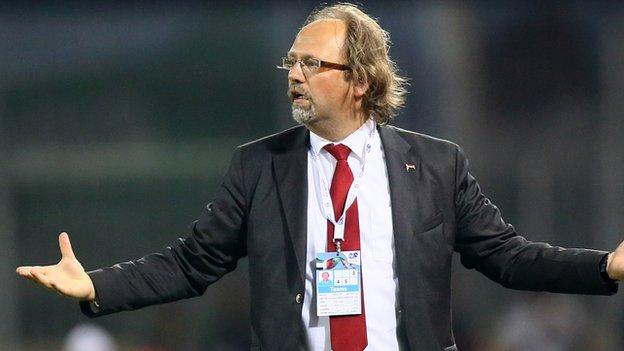 Football Associaton of Malawi (FAM) president Walter Nyamilandu has admitted his organisation does not have the money to hire another expatriate coach immediately.

He also confirmed the deal with Belgian coach Tom Saintfiet, who began work on a voluntary basis in July, has ended.

Nyamilandu says Saintfiet's agreement with the Flames finished ended after the 2-0 defeat in Calabar on Saturday.

"We do not have the money now and what would determine the outcome is how much money we have.

"The money that is available is currently being used to pay former national coach Kinnah Phiri and his team.

"The rest of the funding for the national team for this year has been exhausted so we can not afford now to hire a national coach or let alone hire interim coaches."

Nyamilandu and FAM have time to find the money to hire a new coach with the next competitive football not scheduled to take place until 2015 Africa Cup of Nations qualifiers begin in November next year.

Saintfiet's assistants Eddington Ng'onamo and Patrick Mabedi are also looking for new jobs following the loss to the Super Eagles.

Former national coach Phirri, his assistant Young Chimodzi and technical director Jack Chamangwana are all still employed as development coaches under contracts with the Malwi government.

The government decided to redeploy the trio rather than sack them and so have to pay damages and have contracts until May 2014.