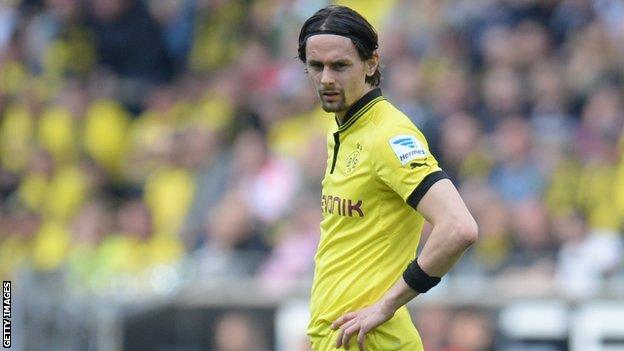 Borussia Dortmund centre-back Neven Subotic has put his international career with Serbia on hold to focus on his German club.

The 24-year-old, who has won 36 caps, has told national coach Sinisa Mihajlovic he will return for the Euro 2016 qualifiers, with Serbia unable to qualify for next summer's World Cup.

"I told Mihajlovic I will not be available for the remaining matches in 2013 because I want to step up work at my club with the objective of improving my performances," he said.

"Having spoken to my club coach, Jurgen Klopp, I asked Mihajlovic for his support and understanding. I'd be delighted to return next year and be part of the Serbia team aiming to qualify for Euro 2016."

The former United States Under-20 international, who was born in Bosnia to Bosnian-Serb parents and raised in the US, will now miss Tuesday's game with Wales.

Former Serbia left-back Mihajlovic, whose own future after the World Cup qualifiers end is in doubt, said: "There was no conflict between us and I don't know what the problem is, although he did say that he wants to focus on his club career.

"There were no indications this might happen. The next qualifying campaign is another story and we will see what the future brings."

Serbia are third in World Cup Qualifying European Group A, above Wales and Scotland, but nine points off second-placed Croatia.