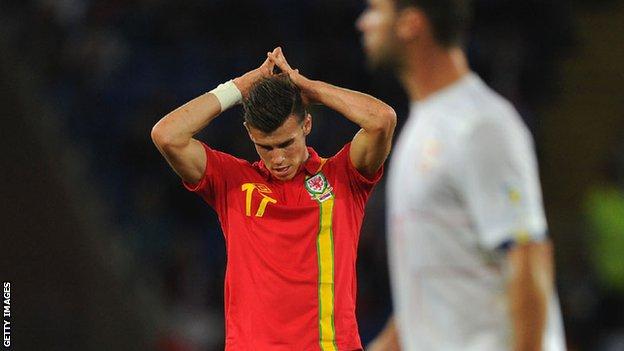 Wales slipped to the bottom of their World Cup qualifying group after being outclassed by Serbia in Cardiff.

Filip Djordjevic's header and Aleksandar Kolarov's superb drive put Serbia in charge, before Lazar Markovic made it three after 55 minutes.

Gareth Bale came off the bench to make his first appearance since his world-record £85.3m transfer to Real Madrid.

He forced a great save from Vladimir Stojkovic, but it was scant consolation for Wales boss Chris Coleman.

It was men versus boys, as simple as that. We didn't get near them and we conceded sloppy goals. We looked like we didn't have the belief that we could beat them

Scotland's 2-1 win in Macedonia compounded his misery as they overtook Wales in the table.

Coleman wanted six points from the games against Macedonia last week and Serbia to be chasing third place in the group.

But instead his team are bottom, with a home game against Macedonia and a trip to leaders Belgium still to come.

In front of a sparse crowd at the Cardiff City Stadium, the hosts looked vulnerable against a Serbian side that has also struggled in qualifying.

Bale's appearance on the hour lifted the crowd, but it was a sideshow on a night when Wales' lack of depth was apparent.

The Real Madrid forward was on the bench for the second game running, though Coleman's bold selection saw five changes from the team beaten 2-1 in Skopje on Friday.

With captain Ashley Williams suspended, Swansea left-back Ben Davies lined up alongside Danny Gabbidon in the centre of defence with Adam Matthews on the left.

David Vaughan and Jack Collison were dropped after disappointing displays, with Sam Vokes leading the attack. Aaron Ramsey took over the captaincy for the first time since the 6-1 defeat against Serbia in September 2012.

And the home side made a disastrous start as their experimental central defence was caught out by a lightning attack in the eighth minute.

Craig Bellamy become the third most-capped player in Welsh football history as he made his 76th appearance for his country in Cardiff. Only Neville Southall (92) and Gary Speed (85) have played more times for Wales.

Boaz Myhill's reflex save from Filip Djuricic's header looped into the air and was headed in from four yards by Djordjevic.

Ramsey and Craig Bellamy were busy, without ever really troubling the visitors' defence, who handled the size and aerial threat of Vokes without alarm.

At the other end the Wales defenders were suffering from a case of the jitters, with Gabbidon's pass causing problems for Andy King, allowing Ljubomir Fejsa to force a good save from Myhill.

But it was a brief reprieve as the clearance fell to Kolarov, who fired home a ferocious left-footed drive from 25 yards.

Serbia underlined their dominance with a third goal in the 55th minute, Markovic driving the ball low past Myhill.

That was the cue for Bale's entry and he rewarded the fans who cheered his introduction in place of King by stinging Stojkovic's hands with a dipping shot before driving wide from 18 yards.

Bale looked short of match fitness having played his last game for Tottenham on 16 July but his swerving, dipping 35-yard free-kick late in the game forced another outstanding save from Stojkovic.

It was a rare highlight on a tough night for Wales.

Wales manager Chris Coleman told BBC Radio Wales: Tonight wasn't a good one. We were missing players tonight so our idea was we'd try and stay in the game really for as long as we can and maybe we can get Gareth on the pitch - and you saw the reaction, he has the capacity to win a game, he really has.

But we gave away sloppy goals tonight and that's disappointing. Against teams like that you've got to expect not to have the ball for long periods of time and you've got to be in the right positions. If you're not they pick you off and that's what happened.