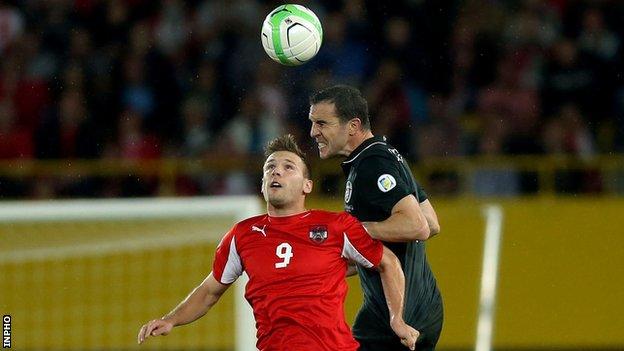 The Republic of Ireland's World Cup qualification hopes are all but over after David Alaba's late goal earned Austria victory in Vienna.

Mathematically, the Republic could still qualify but defeat ends any realistic prospect of earning a play-off spot behind group leaders Germany.

Anthony Pilkington went close for the Irish in the first half but the Austrians created the better chances.

The goal came after a period of intense Austrian pressure with David Forde having denied Andreas Weimann and Seamus Coleman also making a last-ditch block to stop a goal-bound Martin Harnik shot.

Republic boss Giovanni Trapattoni had already indicated after Friday's disappointing defeat by Sweden that he expected his five-year reign to finish after the qualifying campaign.

After Friday's devastating result - and Sweden's earlier win in Kazakhstan - the Republic took to the field knowing a win was an absolute must.

But the Austrians also needed a victory to stay in contention for qualification and it made for a cagey opening at the Ernst-Happel Stadion.

Neither side created a chance of note in the opening 20 minutes although the Norwich winger Pilkington produced some promising early touches on his first Republic start.

As the game finally began to open up, Jonathan Walters burst down the Irish left wing in the 21st minute but Shane Long was too slow to reach the Stoke player's inviting cross.

The Republic's much-derided long-ball game yielded a chance for Robbie Keane on 29 minutes but the LA Galaxy forward pulled his angled shot across the face of goal after Forde's free-kick from deep in the Irish half.

As the pace continued to pick up, Austrian dangerman Alaba attempted to dink a ball over the top into Weimann but Forde reacted smartly to gather.

At the other end, Pilkington fired into the side-netting after chasing a seemingly lost cause, but with the action becoming end to end Alaba forced Forde to make another fine save to push out a dipping shot out for a corner.

The Millwall keeper came to the Republic's rescue once again in the 38th minute as he got down well to block a Harnik shot.

By that stage, Alaba was beginning to pull the strings for Austria in midfield with his pace starting to trouble the Irish defence.

Long did get into a threatening position at the other end moments later but his low cross was gathered by Almer as Walters threatened to pounce.

Either side of half-time, the Republic suffered blows as both central defenders John O'Shea and Richard Dunne were handed yellow cards which means they will miss the game against Germany in Cologne on 11 October.

Sunderland defender O'Shea's night got even worse on 49 minutes as he was forced off by an ankle injury with Ciaran Clark coming on.

Knowing that a draw was going to suit nobody apart from the Swedes, both sides began to show more enterprise with Walters and Wilson off-target for the Irish from long-range efforts.

But Austria were starting to look the more threatening and Forde was fortunate that Weimann shot straight at him in the 66th minute after a pull-back from Christian Fuchs.

The match was beginning to become one-way traffic as the Austrians forced four successive corners and Coleman had to make a heroic block to deny a point-blank effort from Harnik in the 76th minute.

As the Austrians continued to lay siege to the Republic goal, the inevitable happened six minutes from time when Alaba hammered into the roof of the net from eight yards after Wilson could only tee-up Fuchs' low cross to the Bayern Munich man.

With Trapattoni again opting to leave Wes Hoolahan on the bench for the entire match, the Austrians held on for the victory that keeps their qualification hopes alive ahead of an away clash against Sweden.