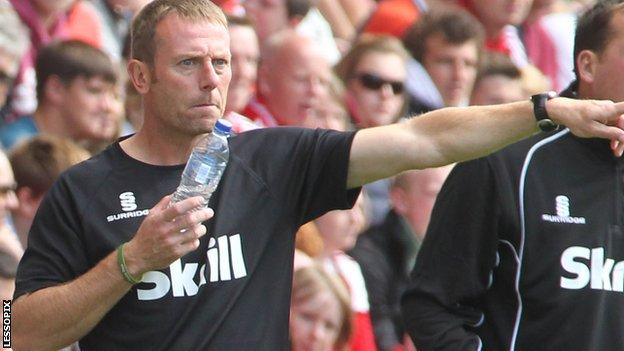 Wrexham have gone six games without a win following a 2-0 defeat at Nuneaton.

But Barr is optimistic Wrexham can turn things around.

"We know what football is, it's a results industry and if you're not getting them then you know the repercussions that could be," Barr said.

"Having said that, only a few months ago, we were at Wembley in the play-off final.

"We're not the same team we were, there's [been] a lot of changes. We seem to be having loads and loads of bad luck.

"Off the back of that people get a chance and I don't think people are taking it at the moment.

Nobody's just going to turn up and let us win a game. We've got to do all the horrible little jobs within the game to get that result

"I feel for our fans because they spend their money to come and watch us and we're not giving them what they should at the moment.

"I'll just ask them to turn up on Friday night against Luton, get behind us and see if between the lot of us we can change our fortune a little bit."

Wrexham have not won since victory over newly promoted Welling United on the opening day of the season on 10 August.

Andy Morrell's right hand man and cited the example of Kidderminster Harriers, who reached last season's play-offs despite a poor start to the campaign when did not win in their opening 10 games, including five straight defeats.

"Kidderminster last year proved that. They got that one result in the 11th game and that was the start of them going [on a run]," Barr added.

"But they had to work hard to get it. Nobody's just going to turn up and let us win a game. We've got to do all the horrible little jobs within the game to get that result."