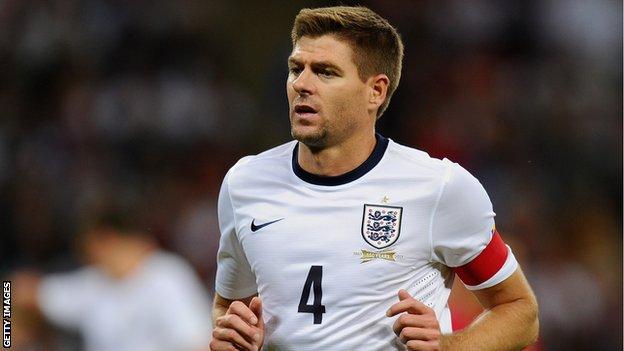 England top Group H with 15 points after their 4-0 win over Moldova on Friday, level on points with Montenegro but with a superior goal difference.

Ukraine are only one point behind the top two in third place, and Gerrard said the game in Kiev was "massive".

But the England captain added: "We have nothing to fear and can go there full of confidence."

Mykhaylo Fomenko's side have won their last four qualifiers - scoring 18 times, including a 4-0 away victory in Montenegro and a 3-1 away win in Poland.

England have won one of the last three away games in the group, an 8-0 victory over San Marino sandwiched between draws in Montenegro and Poland.

"We need to believe in ourselves, roll our sleeves up and put in a performance because if we were to get all three points it puts us in the driving seat," said 33-year-old Gerrard.

Liverpool striker Daniel Sturridge, who missed the Moldova win, has also been ruled out with a thigh problem.

Lambert has scored in each of his first two appearances for England, and Gerrard is confident the 31-year-old Southampton forward will cope with any hostile atmosphere in Kiev.

"He's come on to the scene with a bang, so a goal and a couple of assists you can't ask for any more," added Gerrard.

"The manager took him off [against Moldova] because he should play some part on Tuesday and he'll be an important player for us."

With England rounding off their qualifying campaign with back-to-back home games against Montenegro and Poland, a draw in Kiev would not necessarily be a disaster for Hodgson's side.

But Theo Walcott says the Three Lions are travelling to Ukraine in pursuit of the win.

"We don't want to go out there and try to get a draw," the Arsenal winger said. "That's when we could be caught on the break."

Meanwhile, Frank Lampard is poised to win his 100th cap for his country.

The 35-year-old Chelsea midfielder has scored 29 international goals since making his England debut against Belgium in 1999 at the age of 21.

"It's fantastic to think what he has achieved in his international career," said England defender Gary Cahill, Lampard's team-mate at Stamford Bridge.

"I hope for him that he gets the 100th cap on Tuesday and I hope that we get the win as well."

Former England manager Glenn Hoddle believes England will have to soak up pressure from the home side.

"Stevie Gerrard needs to play in a disciplined role. We need to give them nothing in the early stages, be mean, ne horrible and get them on the break. Theo Walcott occasionally through the middle could give them problems."