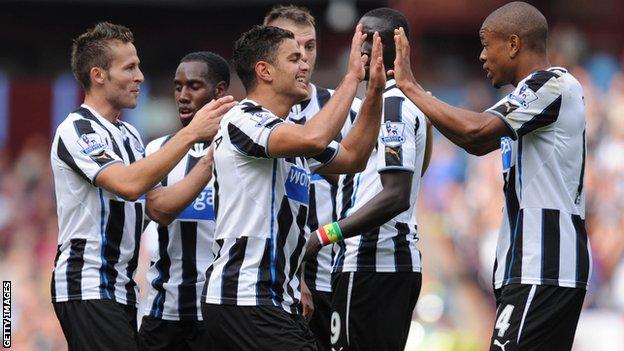 France midfielder Hatem Ben Arfa scored one and set up another as Newcastle United beat Aston Villa at Villa Park.

Ben Arfa opened the scoring after some excellent work from on-loan Loic Remy, who was making his first start.

Christian Benteke equalised after the break when he powered home a corner from Ashley Westwood.

Yoan Gouffran secured victory for the visitors when he reacted quickest after Villa keeper Brad Guzan could only parry Ben Arfa's long-range effort.

The win was Newcastle's second of the season and came just days after manager Alan Pardew put out a statement about the club's failure to add to their squad before the transfer window closed.

The only player brought in by the club this summer was Remy, who has had an immediate impact since signing on a season-long loan from Queens Park Rangers.

He set up Ben Arfa for the only goal of the game as Newcastle beat Fulham last time out and he again combined with his fellow Frenchman to open the scoring.

Single goal in it

All five of Newcastle's last five league wins have been by a single-goal margin.

Ben Arfa, who scored just four goals last season, was causing the Villa defence no end of problems and he deserved his goal, pouncing to side-foot home the cross from Remy.

Villa, who have struggled to recreate the form that saw them beat Arsenal 3-1 on the opening day of the season, looked nervous on the ball, especially in attack.

Ciaran Clark had the best chance for the home side just before the break after Tim Krul could only tip an inswinging ball from the right, but Clark's first-time shot was straight into the side-netting.

Andreas Weimann then broke clear for Villa but with Benteke to his left he chose to go for goal only to screw his shot well wide, much to the dismay of the home crowd.

Whatever Paul Lambert said at the break certainly hit a nerve as his side almost blew Newcastle away at the start of the second half as Gabriel Agbonlahor saw an effort deflected wide before he should have equalised.

Matt Lowton played in Weimann on the right and he swung in an excellent cross, but Agbonlahor somehow diverted the ball well wide from just six yards out.

Villa did add to their squad on transfer deadline day, as they completed the £7m signing of Libor Kozak, and his introduction coincided with the equaliser.

His height added confusion in the Newcastle box, allowing Benteke to score his fifth goal of the season.

It was nothing more than the home side deserved, but with Ben Arfa on the pitch it was Newcastle who always looked the most dangerous.

Villa have conceded a goal in each of their last 13 Premier League matches at Villa Park.

He had one curling effort saved before his long-range effort was not dealt with by Guzan, who could then only watch on as Gouffran fired home.

Papiss Cisse and Cheick Tiote both also went close to adding to the score as Newcastle moved up to eighth in the table, while Villa slipped to 16th.

"We never really got going in the first half - credit to Newcastle on that. We got back in the game with Christian's goal. The second goal was a poor goal to concede.

"You pick yourselves up when you go behind and go again. We gave it a right go but you can't start the way we did."

"We played very, very well today and I thought some of our play was what it should be at Newcastle. We have a real attacking mode at the club and that's the type of offensive side I want to put out, but I have been unable to do so really since Demba Ba left.

"There were some magnificent performances around the pitch and I thought we were excellent."