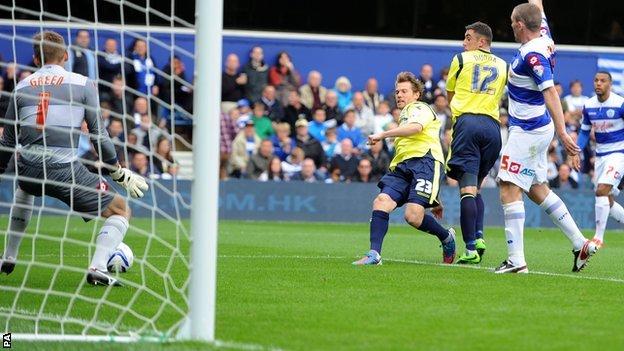 Austin, recruited from Burnley during the summer, scored from close range early in the second half after Birmingham failed to deal with a Joey Barton free-kick.

City were unlucky when Lee Novak headed against a post while Jonathan Spector had an effort ruled out for offside.

Spector felt he should have had a late penalty but he was booked for diving.

Birmingham have now lost four of their opening six games - the club's worst start to a league season for 25 years.

In contrast, this was QPR's fourth consecutive victory as Harry Redknapp's side aim to climb back into the Premier League.

But they were troubled by Birmingham who felt they deserved a point.

After Novak headed Andrew Shinnie's free-kick against the woodwork, Shinnie then wasted a great chance when he shot wide from 12 yards.

Birmingham were punished when Barton found Richard Dunne at the far post and after Tom Adeyemi sliced the ball against the underside of his own crossbar, Austin had the simple task of tapping into an empty net.

Barton later had an effort saved and hit the post in injury time with a superbly struck free-kick but Rangers were unable to add to their lead.

Birmingham pushed in vain for an equaliser as Novak headed wide from Chris Burke's cross before Kyle Bartley also went close with a header.

"I think we rode our luck a bit as Birmingham created opportunities. In our previous 1-0 wins we maybe could have got another goal but today I think the chances went to Birmingham. They failed to take them and we took our opportunity.

"But the team spirit is there and we want that to show in what is a very important period for us, with three games in a week."

"I'm just frustrated for the players. It's cruel. In the first half we could have been 2-0 up. We then score an offside goal and 30 seconds later they get one from a set play. Then we still created opportunities, but it wasn't to be.

"It's tough for my young players. We've had some good performances but not got the results. I've told them to keep the belief, because we are playing well and we will get results."