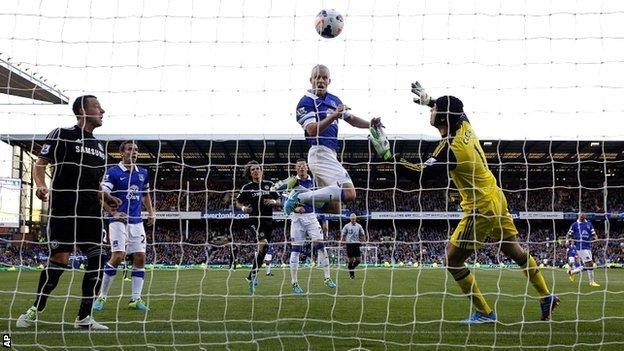 Roberto Martinez recorded his first Premier League win since his appointment as Everton manager with victory over Chelsea at Goodison Park.

Steven Naismith's header in first-half injury time inflicted Jose Mourinho's first domestic defeat since returning to Chelsea - but this was a win of huge significance for Martinez.

He has seen Everton draw their first three league games since succeeding David Moyes but he will have been elated at how his players produced a combination of the passing football he demands, and the resilience that was part of their make-up before his arrival, to claim the three points.

And in Gareth Barry, a loan signing from Manchester City on transfer deadline day, he had the game's outstanding performer - epitomised by a brilliant goal-saving tackle on Samuel Eto'o as Chelsea's new striker looked poised to profit from an error by Everton keeper Tim Howard on the half-hour.

Chelsea's best chances came in the first half but were wasted by Eto'o and Andre Schurrle. After the break they were resisted by an outstanding defensive performance by Everton, who maintained their concentration and strength to the final whistle while also threatening.

Mourinho looked increasingly agitated and frustrated as the clock ticked down - and when referee Howard Webb sounded the final whistle, Goodison Park rocked to a thunderous standing ovation for Martinez's team.

Eto'o was given an instant debut and should have marked it with an early goal when he showed clever movement to pull away onto Ramires' cross, only to direct it back across Howard and wide.

Barry's experience and composure was much in evidence on his Everton debut and he saved a certain goal, again for Eto'o, as the half-hour approached.

Howard's attempt to try and play his way out of trouble looked doomed from the start and appeared to be on its way to an inevitable conclusion when he passed the ball straight to Schurrle in the area. The German crossed for Eto'o, who looked to have the simplest of finishes until Barry's brilliant saving tackle deflected his shot over.

As Chelsea continued to make the better openings, Howard saved well from Ramires, and Branislav Ivanovic headed over before Schurrle wasted another good opportunity with an aimless finish.

Just as Everton looked as though they were going to be grateful to reach half-time level, they landed a classic counter punch in stoppage time when Jelavic did well to head Leon Osman's cross in the direction of Naismith, who headed in from virtually on the line.

Chelsea moved up a gear immediately after the break but Schurrle was once again off target when he could only hit the side-netting as he attempted to lift his finish over Howard.

Mourinho made a double change after 56 minutes, sending on Oscar and Frank Lampard for Schurrle and Juan Mata.

Martinez followed with a change of his own, sending on new-boy James McCarthy for Jelavic after 65 minutes and pushing Kevin Mirallas into the striker's role. The Belgian almost responded with a goal but Cech did well to turn his free-kick to safety and then block a powerful drive.

As Everton pushed for a second, David Luiz was perhaps fortunate to escape with only a yellow card when he pulled back Mirallas but the sheer distance he would have had to cover did not make it a clear goalscoring opportunity.

Ross Barkley's inexperience showed on occasion but the outstanding young player showed relentless drive and, after he was again fouled, Leighton Baines clipped a free-kick on to the bar.