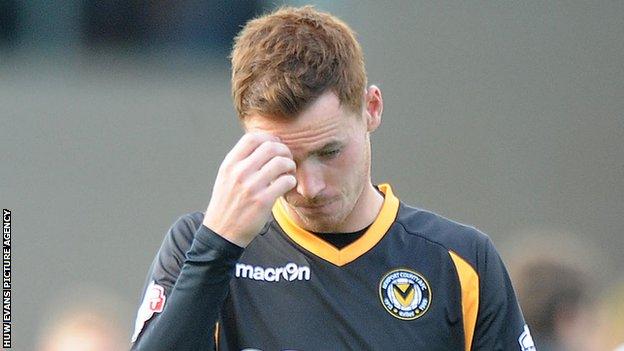 Tom Naylor scored two own goals and conceded a penalty as Morecambe beat Newport to claim a fourth win in a row.

Debutant Billy Jones fired in from close range before Naylor nodded into his own net.

Robbie Willmott's fierce strike gave County a 2-1 half-time lead before Naylor headed in at the wrong end for the second time to level the score.

And when he fouled Kevin Ellison in the 70th minute, Padraig Amond stepped up to claim the points from from the spot.

The win lifts Morecambe to sixth in the table, while Newport drop to 12th after suffering their first home defeat of the season.

"It's very disappointing. We've been punished for indecisive play in our final third.

"We created lots of chances today, but if you give goals away like that it's going to be hard to win games. You don't deserve anything out of a game if you give those types of goal away.

"It's been one of those days. He's [Tom Naylor] been excellent for us since he's arrived.

"Everything that could go wrong went wrong today. Good players bounce back and get stronger from that and I have no doubt that's what he'll do because he's a very good player."