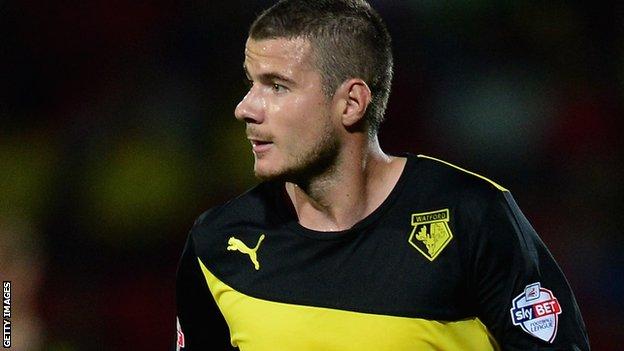 Watford came from a goal behind to secure a draw at home to Charlton, but they remain without a win in their past four matches.

Yann Kermorgant gave the visitors the lead from the penalty spot after Essaid Belkalem had fouled Lawrie Wilson.

The Hornets equalised when Daniel Pudil reacted quickest after Ben Hamer could only parry a shot from Diego Fabbrini.

Johnnie Jackson and Lewis McGugan both went close for Charlton and then Troy Deeney fired over for Watford.

Chris Powell's Charlton are still to register a clean sheet in the league, and are pursuing a first shutout in five months.

Fernando Forestieri started brightly for the home side, twice creating good openings, but he was unable to get a shot on target.

Charlton thought they had opening the scoring when Richard Wood bundled the ball over the line, but the assistant's flag was already up for offside.

Belkalem, who had already tripped Simon Church on the edge of the box, did not learn from his mistake and gave away the penalty for an unnecessary sliding challenge on Wilson.

Kermorgant, who missed a penalty for Leicester in the semi-final play-off defeat against Cardiff City in 2010, made no mistake this time.

It was Watford's 1,000th draw in league football and sees them slip to ninth while Charlton remain 17th with just five points.

"The expectations were different for today's match and things didn't go the way we wanted. But it is a good point considering we went down and it wasn't easy, so I take it as a positive thing.

"There are obviously a lot of things that didn't work as I wanted and I know exactly what those things are and we're going to be addressing them tomorrow and working a little bit on that."

"It's a tough place to come, a decent team and we had the victory in our last game and we wanted to build on it.

"Obviously taking the lead, you want to try and see it out and try and take three points but I think it was a well earned away point.

"It was quite a heated battle at times but of course it was definitely a penalty. They obviously got their equaliser, it was a little bit nip and tuck and they put us under pressure towards the end but our players stood up to it."