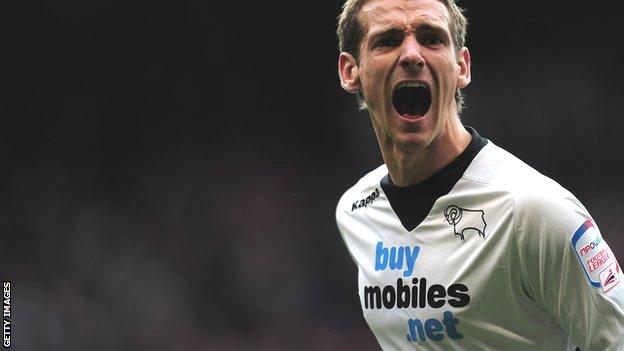 Jake Buxton headed the opener and the Rams were never in trouble.

Bryson smashed home a fine 20-yard shot and, after the Lions had Shane Lowry sent off for a late tackle on Will Hughes, Bryson fired in another long-range shot to make it 3-0.

Derby had not won away against Millwall in their previous seven league trips to the Den and had only picked up two points since a 1-0 win there in December 1995.

A miserable afternoon, which ended with the Lions still bottom of the Championship table, started badly as sloppy marking gifted the Rams a ninth-minute opener.

Jamie Ward's corner was cleared back to him by goalkeeper David Forde, and when he crossed for a second time, Buxton was left free to head home.

That early goal set the tone and Derby, who were brilliantly led by midfield duo Bryson and Hughes, were always on top.

Derby, who have now won all three away league games this season and are seventh in the table, doubled their lead just before the interval when Bryson ran on to Shaun Derry's clearance and smashed the ball home from distance.

A frustrated Lowry was then red-carded for a late tackle on Hughes in the 50th minute and the visitors took full advantage of the extra man.

Bryson second goal soon after Lowry's dismissal was even better than his first, the Scottish midfielder crashing the ball in from 25 yards.

Waghorn grabbed a consolation goal on his Millwall debut but Bryson soon sealed his hat-trick when he rounded off a fine team move involving Hughes and Kieron Freeman.

Substitute Bennett, 17, sealed a memorable afternoon with another fine finish and Millwall left the pitch to loud booing from their fans.

"Some of the chants heading my way are understandable. It's not just in my time. They've had a long, drawn-out misery for the last six, seven months.

"You are always worried about your job. When you are not winning football matches, it goes without saying that you're under pressure. I'm not deluded enough to think that's not going to be the case. I'm the manager, the buck stops with me. I'm not shirking my responsibility.

"If I was a fan today paying for that, I wouldn't be happy. The players have to show more drive. When things aren't going right, you've got to stick together and still keep doing the right things.

"It certainly wasn't what I was expecting after the two weeks we've had and the positive performances. But it was the same old Achilles heel, another set piece. Once we conceded the goal, people were nervous and didn't want to get on the ball.

"A few of the lads crumbled and didn't want to take the responsibility of changing things around."

"We're absolutely delighted. To come here, get the three points and score five goals - we'd certainly have taken that before the game.

"I'm sure Craig would have mentioned if he'd scored a hat-trick before, so I'll take it from that that he hasn't. But they were all absolutely superb finishes. We were just delighted he's had a shot. We keep telling him 'when you're 20 yards out, have a go'.

"But we've just told him that you take three goals away and he's still had an absolutely magnificent performance. He's covered every blade of grass. He was setting things up and getting us going.

"Everywhere is a difficult place to go, but this compares well with our other away wins this season, especially considering the goals.

"Millwall are a bit like us at home - having a bad time of it - and obviously the sending off doesn't help. All we can do is prepare right, put a performance on and we've certainly done that."