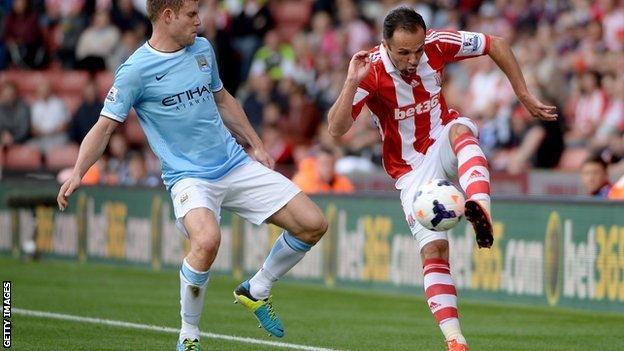 The visitors had spells of possession, particularly before the break, but were limited to long-range shots.

Stoke have never lost a Premier League game at home to Manchester City, winning one and drawing five of their six meetings. But the visitors did win 1-0 at the Britannia Stadium in an FA Cup fourth-round tie in January this year.

The England goalkeeper did well to thwart Jones when the burly striker raced through on goal, but it was a wasted chance in each half by the otherwise impressive Walters that cost the hosts victory.

Manchester City, who have now drawn their last five league matches at the Britannia Stadium, edged possession in the first half.

But, after some initial promise, they struggled against a Potters side who were more dangerous throughout and were brimming with confidence following two top-flight wins in an impressive start to the season.

Manager Mark Hughes has vowed to try to play more attractive football than his predecessor Tony Pulis, and for long periods his side outplayed the team who sacked him four years ago.

Walters spurned a wonderful early chance from five yards when he somehow glanced a header wide from a measured Charlie Adam cross when it looked easier to score.

Jones also squandered a glorious opening, shooting at Hart when one-on-one after nicking the ball from Samir Nasri 40 yards from goal.

The visitors, who made six changes from the 2-0 win over Hull - including five of their front six - lacked cohesion and quality in the final third and were restricted to speculative strikes on goal.

Manchester City's Alvaro Negredo was only just off target with one sweetly struck curled effort.

But Stoke's willingness to play, allied to their familiar pressing game, saw them get on top against an increasingly out-of-sorts visiting side after the interval.

Walters once again should have done better when a couple of yards from goal but failed to properly connect with a teasing Geoff Cameron cross and Jones then headed over from eight yards.

In a rare foray forward, Jovetic volleyed over but Stoke remained the better side.

"Man City will have to play a lot better than they did today - particularly in the final third. But Mark Hughes has got Stoke playing very well and teams will struggle here. They are mixing their style up a little bit more and they could, and should, have won it."

Hughes introduced Austria striker Marko Arnautovic and fellow transfer deadline day signing Stephen Ireland - and the former almost had an immediate impact. Arnautovic did well to hook a first-time cross across the box and it was almost turned into his own net by Matija Nastasic before Jones sent the follow-up strike just wide.

But an otherwise encouraging and positive afternoon ended on a sour note when Jones had to be replaced after limping off the pitch following an awkward fall.

Robert Huth was also accidentally caught in the face by Negredo's knee and needed lengthy treatment but the big Stoke defender was fit to carry on and play out the final few minutes.

"We are disappointed that we haven't beaten Man City, who made a statement of intent over the summer. But we made them look quite ordinary today. In terms of chances and general play we were always looking positive.

"It was just a shame we didn't take our chances. Box to box we were excellent but we needed that killer instinct. The lads are playing exceptionally well and we are enjoying what they are producing.

"We are still very early in terms of how we want to play but we have players who want to get the ball down and pass and they do the ugly side as well. We have a good group who understand the game.

"We are trying to get the balance right. When we get the opportunity I want to get the ball down and play. I am not asking them to do anything they are not capable of. I want them to be a little bit more expansive and I think we will get better as the season goes on."

"Against Stoke here it is always a difficult game but is a good point in a difficult week with all the players we had in the national squad. We could only spend one day with them and prepare the squad and we also have Champions League next week.

"I am not always happy when I draw but this time it is a good point. We had two clear chances to score but Stoke had chances as well.

"We must improve on a lot of things. We are trying to do it and we know about it."