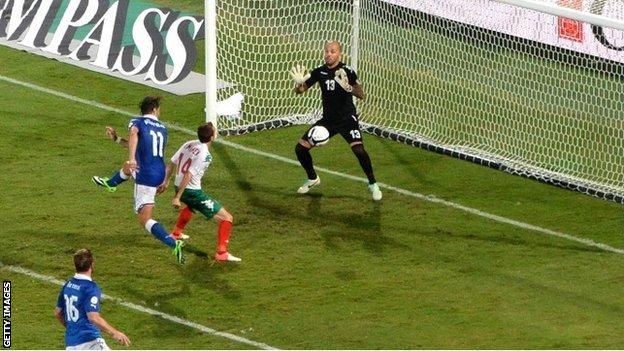 Italy moved to within one win of qualifying for the 2014 World Cup finals with a hard-fought victory over Bulgaria in Palermo.

Alberto Gilardino's first half-header for the Azzurri was the only goal of a tight Group B clash.

The Netherlands needed an injury-time Robin van Persie penalty to snatch a 2-2 draw in Estonia, but remain in control of Group D.

Spain are three points clear at the top of Group I after beating Finland 2-0.

Japan, Australia, Iran and South Korea already know they will be joining hosts Brazil at the 2014 World Cup finals but no European teams have qualified yet

The world champions extended their advantage over France, who were held 0-0 in Georgia and now appear likely to have to settle for a place in the play-offs.

Germany easily saw off Austria 3-0 in Group C, with Miroslav Klose opening the scoring with his 68th international goal - drawing him level with Gerd Muller's goalscoring record for his national side.

Belgium and Croatia are guaranteed the top two places after Friday's results, and who wins the group could be decided when they meet in Croatia in October.

Goals from Steven Defour and Kevin Mirallas gave Belgium a 2-0 victory over Scotland at Hampden Park, and they moved five points ahead of Croatia, who drew 1-1 with Serbia after Mario Mandzukic's goal was cancelled out by Aleksandar Mitrovic.

Wales' defeat by Macedonia in Skopje ended their slim hopes of finishing second.

Italy will seal their place in Brazil if they beat the Czech Republic in Torino on Tuesday.

Gilardino's 38th-minute header from Antonio Candreva's cross put Italy ahead against second-placed Bulgaria, but it took a superb second-half stop from Gianluigi Buffon to prevent Ivelin Popov from equalising.

With three games left, the win moves Italy seven points clear of Bulgaria, who are in a four-way battle for second place with the Czech Republic, Armenia and Denmark.

The Danes scraped a 2-1 win in Malta thanks to a Ryan Camilleri own goal, while Armenia shocked the Czechs with an injury-time winner in Prague.

Germany are still five points clear at the top after brushing aside Austria in Munich.

Klose, 35, converted a low Thomas Muller cross for his 68th goal in 129 games, equalling the mark Gerd Muller managed in 62 games that has stood since 1974.

"It's an honour to be level with Gerd Muller's record, but I have often said you can't really compare the two of us as he scored his goals in so few games," said Klose.

Toni Kroos added a second goal from long range and Muller rounded off the scoring with a late tap-in.

Sweden move three points clear of the Republic of Ireland in second place, after coming from behind to win 2-1 in Dublin.

Germany will qualify for the finals if they win in the Faroe Islands on Tuesday and Sweden do not beat Kazakhstan.

The Dutch goals in their draw with Estonia came 92 minutes apart. Arjen Robben put the Oranje ahead in the first minute, but they needed Van Persie's penalty to rescue a draw after two fine finishes by Konstantin Vassiljev.

The result ended the Netherlands' 100% record in this campaign, and a run of 14 straight wins in World Cup qualifiers, dating back to a 2-2 draw with Macedonia in October 2005.

"There was nothing wrong in the second half, but they scored a great goal and then you have to chase the game,'' Manchester United striker Van Persie said afterwards.

Romania moved above Hungary and into second place after beating their neighbours 3-0 in the 'Danube Derby', with the highlight being a spectacular Doru Pintilii strike.

Switzerland stay four points clear at the top despite throwing away a 4-1 lead against Iceland, eventually drawing 4-4 after Johann Berg Gudmundsson completed his hat-trick with an injury-time equaliser.

Albania's defeat by Slovenia meant Norway moved into second place by beating Cyprus, with Tarik Elyounoussi and Blackburn forward Joshua King scoring the Norwegian goals either side of half-time.

Fabio Capello's Russia briefly moved above leaders Portugal with a 4-1 win over Luxembourg, but Cristiano Ronaldo's hat-trick in an eventful win over Northern Ireland ensured his side swiftly returned to the summit.

However, Russia, who have a game in hand on the Portuguese, will finish top of the group if they win their final three games - against Israel (h), Luxembourg (a) and Azerbaijan (a).

Israel, who play Azerbaijan on Saturday, are the only other team with a realistic chance of finishing in the top two.

Leaders Bosnia suffered their first defeat of the campaign, going down to a surprise 1-0 home defeat by Slovakia.

Greece moved level with Bosnia at the top thanks to a narrow 1-0 victory over Liechtenstein.

England's 4-0 win over Moldova moved them to the top of the group on goal difference after Montenegro drew 1-1 in Poland.

The Poles thought they had snatched victory when Jakub Blaszczykowski found the net in the 94th minute but his effort was ruled out for offside.

Ukraine are a point behind England and Montenegro in third after eight different players scored in their 9-0 rout over San Marino. Yevhen Khacheridi was their only player to score twice.

Real Madrid striker Karim Benzema started for France but again failed to find the back of the net and has now gone more than 20 hours - 15 games - without scoring for his country. The 25-year-old has a total of 15 goals in 59 matches for France and last scored for them against Estonia in June 2012.

France are now three points behind with just two games remaining, after being held by Georgia.

Franck Ribery hit the post and Olivier Giroud and Bacary Sagna were denied by home keeper Giorgi Loria, leaving France without a goal in their last five games.

"We did a lot of things, we had opportunities in the end, but we failed to score," France coach Didier Deschamps said afterwards.