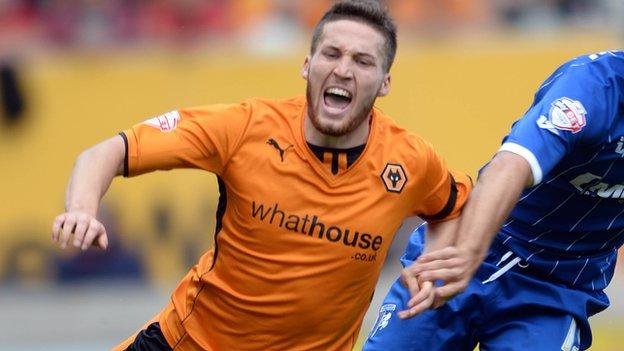 Wolves right-back Matt Doherty has signed a new three-year contract with the promotion-chasing League One club.

The Republic of Ireland Under-21 international, who has been a fixture in the Wolves team since late February, has been rewarded for his consistency.

The 21-year-old Dubliner, who joined Wolves from Irish League side Bohemians three summers ago, is keeping fellow Irishman Kevin Foley out of the team.

"It's important that I keep working and don't let my standards drop," he said.

"I've really enjoyed my football since getting into the team towards the end of last season, and have managed to keep it going this season under the new gaffer as well."

Doherty was given his Wolves debut by Mick McCarthy in an FA Cup third-round tie at Doncaster in January 2011, going on to play his first Premier League game against Liverpool at Anfield six months later.

He was out on loan at Hibernian when McCarthy was sacked in February 2012 and did not feature either under his immediate successor Terry Connor, or Stale Solbakken, who sent him out on loan to League Two side Bury.

But he was brought into the Wolves first team on a regular basis by Dean Saunders in February - and has not looked back, continuing to flourish under new Wolves boss Kenny Jackett.

"I think it's great that so many younger players are getting a chance here now," said Doherty,

"We have seen Leigh Griffiths sign a new contract, I've signed one, and I am sure there will be others to follow."