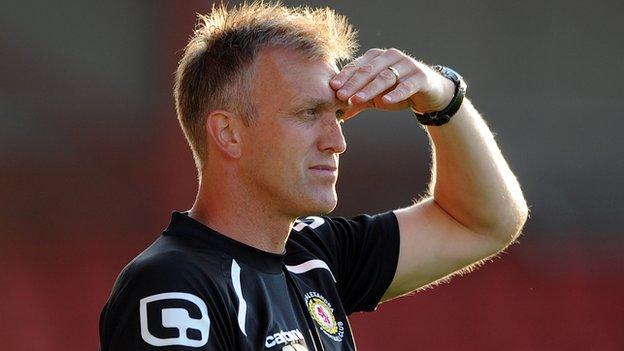 Crewe manager Steve Davis has vowed to remove the disruptive influence within the club's dressing room which has soured their start to the season.

"There's one or two who need fishing out and are disrupting the togetherness of the squad," Davis told BBC Stoke.

"That's up to myself and [assistant manager] Neil Baker to dig that out and find out why that is."

Davis added: "Sometimes that can come about through not being in the team, but players have to be professional and deal with it.

"It's part of what being a professional footballer's all about.

"Whether you're in the team, or you're not in the team, you act and train the same way and you work hard to get back in.

"Some players don't do that. They would rather disrupt."

That was a fourth straight defeat on the road this season for Davis's side and, although their three league losses (on top of the League Cup exit at Bury) have all been against likely promotion challengers, their away form is a concern.

And, although Davis might be tempted to make changes, starting with this Saturday's visit of Peterborough United to Gresty Road, he admits that he has certain players in the ranks who are not pulling their weight.

"The other thing is the performance of some of the players," added Davis.

"The repetition of mistakes and errors that they've been making now over a period of time makes you think they're never going to improve.

"They're never going to get where you want them to get. You have to look at that as well, and that's what we're looking at."