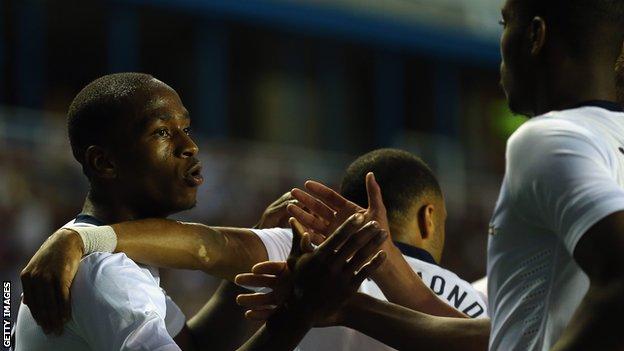 Saido Berahino scored on his England Under-21 debut to secure a 1-0 victory over Moldova in Gareth Southgate's first match as manager.

Southgate took charge of the team in August, replacing Stuart Pearce after he departed following a disappointing European Championship campaign.

And West Brom striker Berahino's early goal gave his side victory in Reading in their opening Euro 2015 qualifier.

Berahino also missed the ball when presented with an open goal late on.

Former Middlesbrough manager Southgate has promised to prioritise style over results during his time overseeing England's underage sides, and there was plenty on display in the early stages at the Madejski Stadium.

Liverpool defender Andre Wisdom gave Moldova goalkeeper Alexei Koshelev an early save to make with a powerful header before Berahino opened the scoring.

The 20-year-old, born in Burundi, turned on the edge of the area after a fortunate touch took him clear before firing into the top corner.

Norwich summer signing Nathan Redmond was causing the Moldova defence problems, and a clever run just before the break ended with the former Birmingham winger shooting into the side-netting.

After the break, Redmond continued to look lively and a clever cross for Wilfried Zaha ended with the Manchester United winger heading over from inside the six-yard area.

Zaha's miss was bad, but Berahino was handed a better chance with 12 minutes left.

Second-half substitute Sammy Ameobi played a clever ball over the top for Berahino, whose controlling touch took the ball past Koshelev only for him to miss the ball as he tried to score.

Derby's Will Hughes had a shot cleared off the line by Iurie Mirza in the final moments as the scoreline failed to show England's dominance.