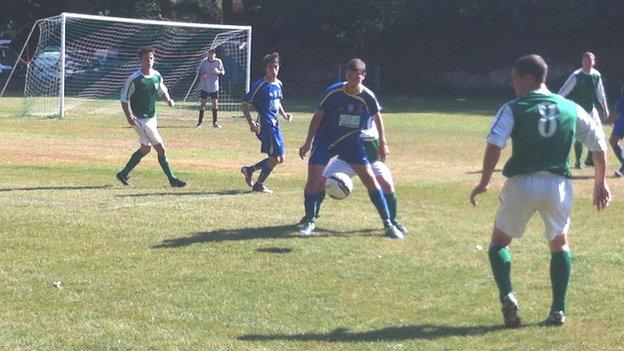 Trinity striker Daryl Wilson netted a hat-trick to fire his side to a 3-1 win over fellow Jersey Premiership newcomers St Clement.

Wilson's first-half double put Trinity on course for the victory in their first game back in the top flight.

His third, after beating the off-side trap, secured all three points but St Clement fought back late on.

Andy Le Moine's headed goal though was too little too late.

Trinity were promoted to the Premiership after winning all 16 of their Championship matches last season, while St Clement were 12 points back in second spot.

"I thought it was an excellent performance from the boys," Trinity assistant manager Peter Grierson told BBC Radio Jersey.

"He [Wilson] is the outstanding striker on the island at the minute - he was unplayable at times I thought today.

"We were 3-0 up and cruising, made a couple of changes and then we got a player injured so we had to carry on with 10 men."

The match at Trinity's Riley Field ground was Saturday's only Premiership fixture in the island.