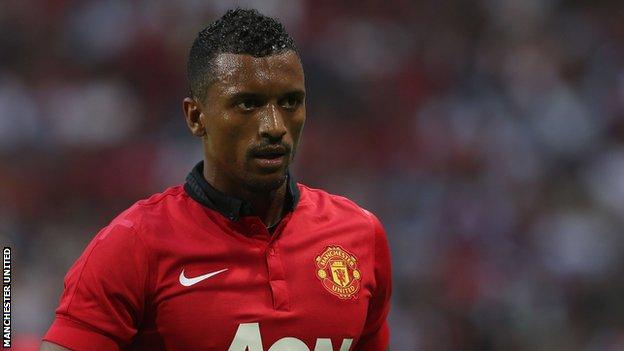 Manchester United winger Nani has signed a new five-year deal, keeping him at the club until June 2018.

Nani, 26, has scored 40 goals in 217 games since joining the Premier League champions from Sporting Lisbon in 2007.

During his six-year stay, he has won eight trophies, including four Premier League titles and the Champions League.

He said: "Playing at United has been a fantastic experience for me. When I came to the club, I never imagined the success we have enjoyed."

There had been speculation about the Portugal international's future, after he made only seven Premier League starts in 2012-13.

Despite missing most of United's pre-season schedule with a nose problem, Nani has impressed new Manchester United manager David Moyes enough to be given an extension to his contract, which was due to expire next summer.

"I'm really pleased Nani has re-signed for the next five years," the Scot said. "He has great ability and experience beyond his 26 years.

"I've been impressed with his approach to training and look forward to working with him in the coming seasons."

Nani came off the substitutes' bench during Sunday's 1-0 defeat by Liverpool to make his first competitive appearance under Moyes.

He said: "I'm very happy that the new manager has shown this faith in me and I'm looking forward to helping the team compete for more honours this season."

Nani is on international duty with Portugal, who play a World Cup 2014 qualifier against Northern Ireland on Friday before a friendly with Brazil on Tuesday.

United are next in action when they host Crystal Palace in the Premier League on Saturday, 14 September.