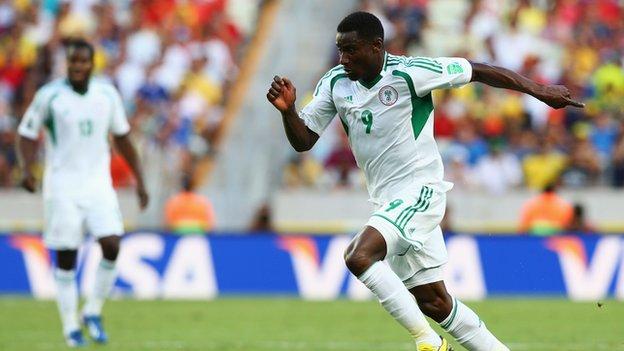 The Nigeria star only signed a four-year contract with Bremen in 2012 after moving from Belgium's Club Brugge.

But he made just 21 appearances, mostly as a substitute last season and scored just once last season.

"Regular football is top of the agenda and of course the main reason for moving," Akpala told BBC Sport.

"Every footballer desire to play regularly in the first team and Karabukspor provides that opportunity."

When you are in great form...you know opportunity can come

Akpala played for the Super Eagles at the 2013 Confederations Cup in Brazil but is not in the squad for the current round of World Cup qualifiers.

But he insisted that the move was not motivated by trying to earn a recall to the Nigeria squad.

"As a professional you want to play regular football at the top level," he said.

"The main reason I have joined Karabukspor is not to try to help my Nigeria chances - I know that will come if I am playing consistently well for my club.

"When you are in great form with your club, scoring goals and in good condition, you know the opportunity can come.

"I have been called up recently and I know that with the talents available to the coaches you'd need to play games to get into the squads."

Akpala trained with English Championship side Reading earlier this summer, but was unable to secure a move to the Madejski Stadium.

According to Werder Bremen manager Thomas Eichin, the Turkish club Karabukspor does not have a buy-out option at the end of the season.

"Joseph Akpala has great skill, but so far he has not been able to break into our first team regularly," Eichin told the club website.

"Now, he will get the chance to play regular first-team football in the Turkish league. There, he can pick up the self-confidence every striker needs."