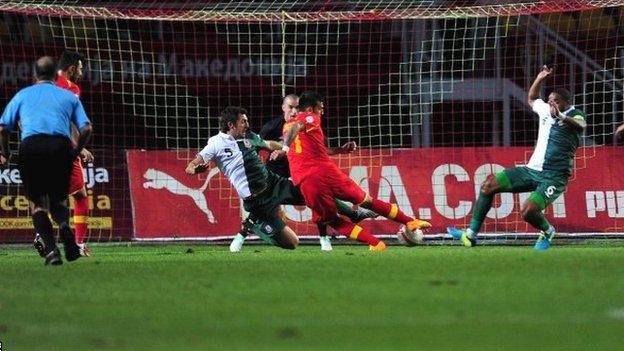 Ivan Trickovski gave Macedonia the lead after a deflected free-kick fell kindly, but Aaron Ramsey brought Wales level with a penalty he won himself.

World record signing Gareth Bale stayed on the bench, with the Real Madrid star not yet match-fit.

But Wales seemed to have done enough for a draw without him until Trajkovski seized on David Vaughan's mistake.

But the battle for the other four teams in the group was always realistically for third place and with it an improved seeding when the draw for Euro 2016 qualification is made.

After slumping in Skopje, defeat by Serbia next Tuesday in Cardiff is likely to end Wales' hopes of even third place.

They will have to face the Serbs without captain Ashley Williams, after the Swansea City centre-back picked up a yellow card in a scuffle moments before half-time, while midfielder Jonny Williams limped off injured after another impressive outing and is a doubt.

The match at the Phillip II Arena was the first between the two sides and Wales started with Cardiff City veteran Craig Bellamy as a lone striker, plus a five-man midfield given license to get forward in support.

Wales manager Chris Coleman had suffered the embarrassment of arriving late in Skopje on Thursday, after missing the team flight from Cardiff because of a lost passport, but a bright start suggested Wales' preparations had not been unduly affected.

Joe Ledley found Jonny Williams drifting off the last defender and the Crystal Palace midfielder bore down on goal, only for goalkeeper Tome Pacovski to slide in to block with his feet.

Macedonia had given Wales little trouble until Vaughan dived in on Goran Pandev to give them a free-kick just outside the area.

Agim Ibraimi hit the wall, but the ball spun into the path of Trickovski and he reacted quickest to smash the ball past Boaz Myhill.

When Ramsey was brought down soon after, Bellamy almost provided the perfect riposte for Wales but saw his free-kick come back off the post.

Wales could have been excused for feeling hard done by, but they kept pressing forward and Ramsey had them deservedly level by half-time.

He jinked around Trickovski into the area and the Macedonia goal-scorer undid his earlier good work by bringing Ramsey down.

The Arsenal midfielder took the penalty himself and hit it hard and straight as Pacovski dived away to his right.

The half ended with tempers raised after an untidy scuffle started by Pandev who, after Vance Sikov fouled Ramsey, tried to grab a handful of the Welshman's shirt to haul him to his feet.

Pandev was booked for his actions, but so was Ashley Williams in the minor melee that followed and that yellow card brought a one-match ban for the Wales captain under the totting up system.

That ill-temper spilled over into the second half and Jonny Williams limped off after being on the end of a robust Ibraimi challenge, for which the Cagliari midfielder was booked.

Coleman resisted the temptation to throw Bale into the fray and instead Brighton's Andrew Crofts came off the bench.

Jack Collison and Ledley went close as Wales sought a winner, both seeing their shots go just wide of the post.

Macedonia had good chances of their own, with first Pandev denied as Sam Ricketts - winning his 50th cap - threw himself in the way, before Myhill came out well to save from Trickovski.

But with 10 minutes remaining Wales' encouraging performance was undone when Vaughan lost possession on the edge of his area, allowing substitute Trajkovski to drill home a low shot and hand Macedonia victory.