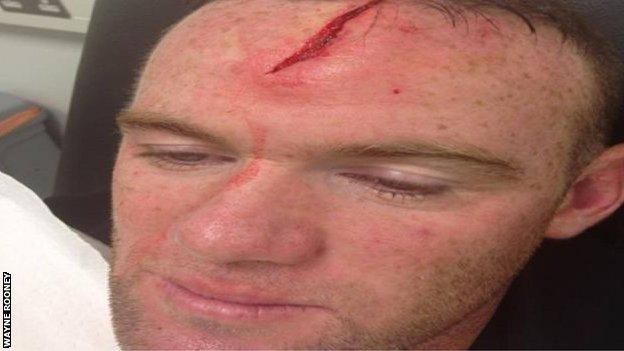 Wayne Rooney has posted a picture of his head injury on Facebook after the striker was questioned over his commitment to the England squad.

Rooney suffered the cut via the boot of Manchester United team-mate Phil Jones, forcing him out of England's World Cup qualifiers on Friday and Tuesday.

He said: "Some people seem to be questioning my commitment and the fact I had to pull out of the two games.

"I'm sure people will see the reason why I won't be able to play."

Rooney, 27, added: "There's nothing I would like more than to be helping the lads in the qualifiers."

United boss David Moyes said the forward could be out for three weeks following the accident, which happened on Saturday in the build-up to United's defeat by Liverpool - a game Rooney missed because of the injury.

England team-mate Theo Walcott has described the photograph as "like something out of a horror film".

Roy Hodgson's side face Moldova at Wembley on Friday and then a trip to Ukraine on Tuesday.

Rooney is one of three players who have withdrawn from the squad because of injury.

Glen Johnson was forced off with an ankle injury during Liverpool's victory at Anfield on Sunday, while United's Jones was also substituted with a similar problem.