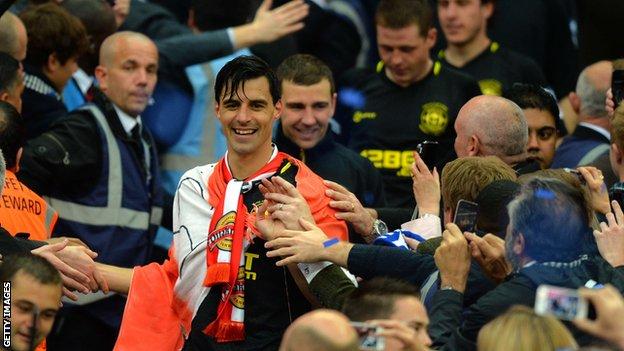 Austrian defender Paul Scharner, who won the FA Cup with Wigan in May, has retired from football at the age of 33.

He recently left Hamburg after agreeing a settlement for the remainder of his contract with the Bundesliga side, for whom he made just four appearances.

But the former West Bromwich Albion man could not prevent their three days later.

Scharner had been involved in a dispute with Hamburg, claiming they "had to pay for their mistakes" and accusing the club of having "no philosophy".

He initially joined Wigan from Norwegian outfit Brann in January 2006 and quickly became a cult figure with their fans, as much for his as his impressive performances on the field.

A two-year stint with the Baggies began in the summer of 2010 before he moved to Germany, although he became frustrated with a lack of first-team opportunities at Hamburg and returned to the DW Stadium earlier this year.

Scharner started the 1-0 victory against Manchester City at Wembley, but his time at Wigan finished on a sour note as the club's eight-year stay in the Premier League ended in relegation.

His international career was interrupted by fall-outs with coaches and the Austrian authorities, which led to him missing Euro 2008, a tournament co-hosted by his home country.