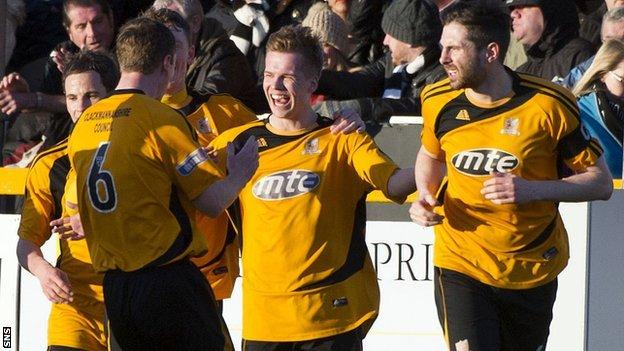 Alloa Athletic offer the cheapest day out in the Scottish Championship, according to BBC Sport's annual Price of Football study.

The total price of a programme, a pie, a cup of tea and the cheapest adult ticket is £16.50 at Recreation Park.

An equivalent match-day experience is available for under £20 at Cowdenbeath and Morton and up to £26.90 elsewhere.

The most expensive in the cheapest day-out category is Dundee, who were relegated from the top flight.

Dens Park is also joint-top of the most expensive match-day ticket category at £20, along with the Falkirk Stadium.

It found the average prices for cheapest season tickets in Scotland's second tier have increased by almost 3% but the average match-day ticket, programme and catering prices either fell or remained static.

Alloa, who have had successive promotions, charge £14 for adults on match day - £1 cheaper than Cowdenbeath and Morton and £2 less than Dumbarton, Hamilton, Livingston and Queen of the South.

"We're aware that we're in a recession. We're aware that there is competition to football, there's other ways for people to spend their money. Football is price sensitive and we understand that.

"Families expect to be entertained and that's one of the big challenges, particularly for lower-level Scottish clubs."

The Wasps also boast the lowest-priced season tickets in the division at £160 (cheapest) and £170 (most expensive), prices lower than some clubs in Scottish League One.

Fellow promoted side Queen of the South offer season tickets at £246 and £256.

The most expensive season ticket in the division is from Dundee's higher category at £290, with their cheapest option of £260 less expensive than that of Livi (£270).

Most clubs in the division offer adult and child tickets that will represent savings and/or discounted rates for younger fans.