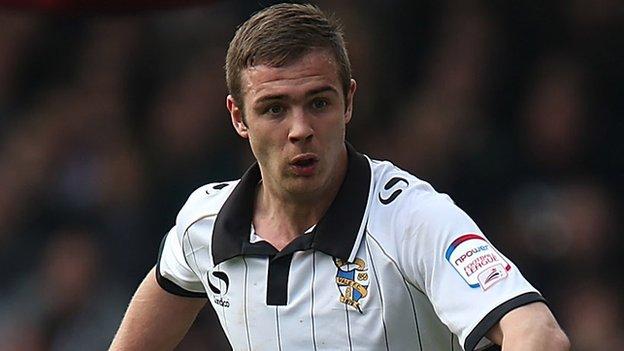 Port Vale striker Tom Pope is back firing on all cylinders again after an injury-hit start to the new campaign.

But Tuesday night's match-winning Johnstone's Paint Trophy double against Bury made it three in two matches.

"I've struggled with injury niggles, but I always had confidence in myself to get goals," he told BBC Radio Stoke.

"It's been a difficult few weeks and you start to wonder.

"But it's just about getting the right chances and the ball falling for you."

It was in the final minute of Vale's home defeat by Wolves on Saturday that Pope broke his season's duck - and his goals again came late on in the JPT victory over Bury.

It looked as if Vale might be on their way out when Chris Sedgwick put Bury ahead on 71 minutes.

But Pope headed the home side level before firing home with his left foot a minute into injury time to earn Vale a 2-1 victory and see them into Saturday morning's second round draw.

And the 28-year-old boyhood Vale fan admits that his early-season struggle with a hand injury in particular had its effect.

"It was only a hand injury and I wasn't going to stop playing with that," he said.

"But, when you're trying to hold off six-foot-four centre-halves built like God knows what, and the pain is ridiculous, you try doing it with the other arm and you end up giving the ball away.

"The hand injury was very painful. Then I got a dead leg at Oldham and could hardly walk second half, probably injuring the side.

"But I've maybe learned a lesson from that, I'm now over the niggles and can look forward.

"I scored in the last minute against Wolves and now I've got these two and I know I'm feeling a bit sharper."