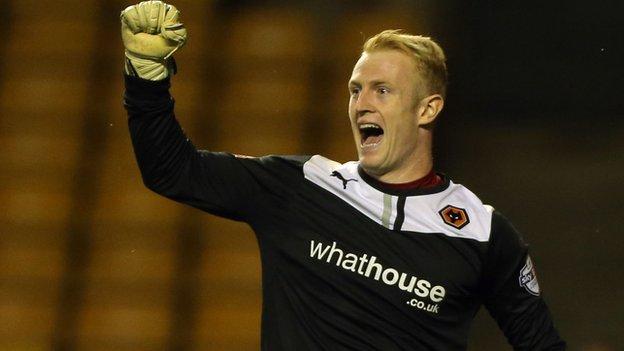 Wolves debutant keeper Aaron McCarey was the Molineux penalty shoot-out hero against old club Walsall to help steer his side safely though to the second round of the Johnstone's Paint Trophy.

And McCarey, 21, who had two loan spells at Walsall last season, hopes his coolness under pressure has further enhanced his hopes under Kenny Jackett.

"We have top keepers here in Carl Ikeme and Wayne Hennessey," he told BBC WM.

"But I've shown the manager I'm capable of playing if he wants to put me in."

But McCarey was beaten for the first time when former Wolves reserve striker Ashley Hemmings dived to head to head Walsall level on 53 minutes from Craig Westcarr's cross.

And, although he was helpless again when Walsall substitute Troy Hewitt blasted home five minutes from time, he came up trumps with two penalty saves in the shoot-out - from Westcarr and Andy Taylor.

"On a personal level, it was a good debut, with a good ending," added the Republic of Ireland Under-21 international.

"But I was disappointed to concede the two goals as they were the only saves I had to make.

"But they were good strikes. And I knew Walsall were capable of doing that.

"I know a lot about them. They've got a good squad of players there under Dean Smith and Richard O'Kelly and they came here and played well."

Wolves, who made six changes to the team that won 3-1 at Port Vale on Saturday, must now wait on left-back George Elokobi, who went off in the 56th minute with what appeared to be a hamstring injury.

But striker Kevin Doyle (thigh) and midfielder Zeli Ismail, who picked up a minor leg injury at Vale Park, are expected to be fit for the visit of Swindon Town a week on Saturday.

Walsall are also back in action on 14 September at Crewe, before returning to Molineux the following Tuesday night for their rearranged League One derby rematch against Wolves.