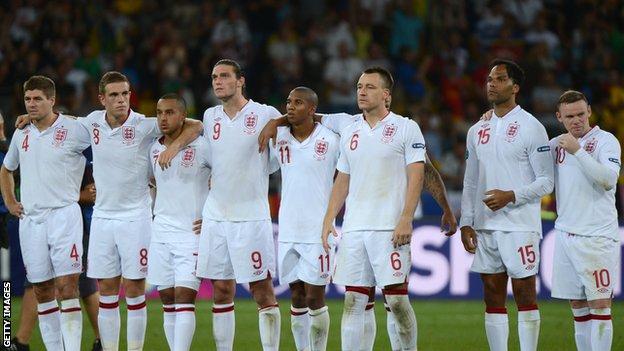 English football is at a low. The national team have not made the semi-finals of a major tournament since 1996, while fewer Premier League clubs are putting their faith in domestic talent.

But what needs to be done to make that goal a realistic possibility?

'Pick players for skill, not size'

The Football Association has recognised the need to improve coaching at grassroots level and in 2010 released 'The Future Game' - a technical guide for coaches outlining the requirements that young players will need to play the game at the highest level.

But Chris Waddle, who made more than 60 appearances for England between 1985 and 1991, says that the development of English talent is still focused too heavily on the biggest and strongest, rather than the most technically talented.

"I think the reason why we are not producing good enough footballers any more is the structure at grassroots level," said Waddle.

"I do some scouting for Sheffield Wednesday at youth level and for me, whether a player is 4ft 2ins or 6ft 4ins, if they have the talent I would give them the chance.

"However, there are too many occasions where the player who is that bit taller than the rest gets scouts knocking on the door and it always has been in English football.

"There is also too much pressure on results. Parents go absolutely mad about results. I would rather see us produce 10 footballers and finish bottom of the league than these teams win at youth level. Both of these issues need to change."

Did you know? Shaun Wright-Phillips was rejected by Nottingham Forest for being too small. He later went on to play for Manchester City, Chelsea and is now at Queens Park Rangers

Dyke has spoken of a desire for the FA and the Premier League to work 'hand in hand' to help improve the quality of English football.

But Wigan chairman Dave Whelan believes handing control of the England national team to the Premier League would be a step in the right direction to an improvement in the county's fortunes.

Whelan said: "Every team wants to win the Premier League and every team wants to play in Europe, but we still have a national team. We started football in the first place and England is and should be our pride.

"I think one possible solution is to let the Premier League take over the running of the English team.

"The FA is run by a lot of people from all around the country and they are all amateur people. When you look at who serves on the FA it is surprising where they come from and what little they know about football.

"Let's get the Premier League to run the England team. If they did, I am sure it would improve the whole England camp, the quality of players and their attitude."

Did you know? There has been talk of a voluntary agreement between the FA and the Premier League to put England first, which would mimic a similar agreement in place in German football between the Deutsche Fussball Bund and the Bundesliga.

Former England and Manchester City defender Danny Mills believes it will take major changes at all levels of English football to spark an improvement in the quality of home-grown players, describing the current structure as 'broken'.

"For me, this is now the time for revolution. Forget about evolution. The English game from junior level right through to the senior team is broken," he said.

"It's in a bad state of affairs. Just look at the transfer window. How many top English players were sold in the transfer window or wanted by other clubs? Virtually none. That has to speak volumes that, at the moment, our senior English team are simply not good enough for their players to be wanted by everyone else.

"Greg Dyke has the opportunity from grassroots level all the way up to say: 'Forget about voting this in. Forget about making this little change or that little change. These are the new rules. This is what we've been looking at.'

"They've done so much research over the past five or 10 years that they know what's right. They have to take it by the scruff of the neck and say: 'Change is happening. Like it or lump it.'"

Did you know? The Football Association has pledged to invest £150m over the next three years to improve facilities.

Former England and Aston Villa manager Graham Taylor says football clubs have more power than the Football Association with regards to determining a player's availability to represent the national team.

"If you are a club manager, the club come first, because they are who you are working for," said Taylor.

"I feel sorry for some of the players because there is a lot of pressure put on them at times from certain club managers. If they do withdraw [from the England team], they can get a good rest and be better for their club.

"The clubs have taken over to a great degree with regards to what they want to happen. It's not in the interest of the national side."

Did you know? Manchester United duo Wayne Rooney and Phil Jones and Liverpool defender Glen Johnson have withdrawn from the England squad for the upcoming World Cup qualifiers against Moldova and Ukraine.

'Give lower league clubs an incentive to develop youth'

The Elite Player Performance Plan (EPPP) was introduced for the 2012/13 season with the aim of improving youth development by guaranteeing more funding for grassroots football over a four-year period. However, it also meant clubs could receive lower fees for players under the age of 17.

Wycombe and Yeovil have closed their academies, with the latter citing the EPPP as the reason behind their decision, and Waddle wants lower-league clubs to be given a bigger incentive to develop new talent.

Waddle said: "A Premier League club can just throw the net out and bring in all the best kids. They can just take one out of that group and let the other 20 or so go - and they all go missing. It should not be like that.

"If there is a talented young player at a Championship club, they should be left there until a certain age. If they do get the big boys coming, rather than waste money on the foreign players, make them spend a fee that will help generate grassroots football.

"I don't know why half of the lower-league clubs bother with youth set-ups - because if there's anybody decent, the big club just nick them for peanuts.

"Eventually they are going to start wondering if it is worth having them and as a result youth development will get worse."

'Give English youth a chance at the top'

"I know the debate is raging at the moment regarding the number of foreign players in the Premier League. It is at an all-time high," said Parry.

"I remember the likes of Jamie Carragher saying not very many years ago that if he was trying to break into the team now, he was not sure he would get the chance. He felt he needed 10-15 games to prove himself.

"Gareth Bale at Southampton is another example. He was one game away from being released by Southampton. But look at him now."

Did you know? English under-21s made up 2.28% of the total minutes played in 2012-13. Manchester City, Chelsea, Swansea, Stoke and Wigan failed to field an English player under 21 all season.