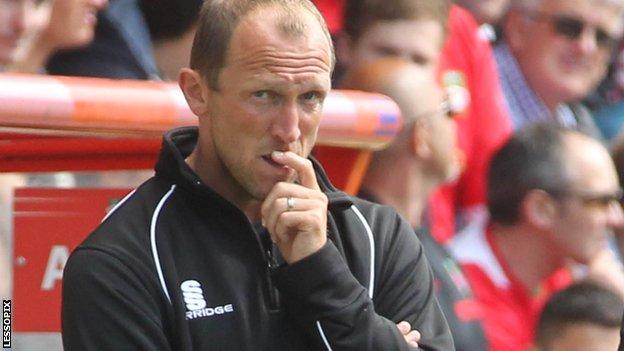 Manager Andy Morrell says Wrexham need to go back to basics in order to kick-start their Conference Premier campaign.

Wrexham have made a disappointing start to the season with only one win from their opening six games.

Morrell's side have lost their last two league matches, including a 2-0 home defeat to rivals Chester last Saturday.

"I've got good footballers at the club - it's just getting them back to doing what they're good at," Morrell said.

"You have to strip it right back, go back to real basics. It's just simply that.

"The last couple of games we've been miles away from where we expected to be.

"We let a lot of people down on Saturday and we weren't good enough.

"We've had it fairly good for two years and it's the first time I've lost back-to-back games. But I'm not going to shirk away.

"I feel like I've done an OK job and I think the players still want to play."

Wrexham's form is in contrast to Saturday's opponents Nuneaton, who have made an unbeaten start to the season and are third in the table.

Morrell says defensive problems have hampered Wrexham, with the manager having to change his back four due to injuries and suspensions.

And the Wrexham boss is keen to add defensive cover, with Mark Creighton expected to be out for up to six weeks after suffering a hamstring injury against Chester.

Although the transfer window is now closed, Wrexham can sign out of contract players and the window for loan signings opens on Tuesday, 10 September.

"We're looking to try and strengthen if we can at centre-half to just give us a bit of stability," Morrell added.

"It's not easy but we're looking and we'll try. If we can get that then I'm sure that the lads will go from strength to strength from then on.

"If we're bringing people in we need to make sure they're the right characters but for the right money."