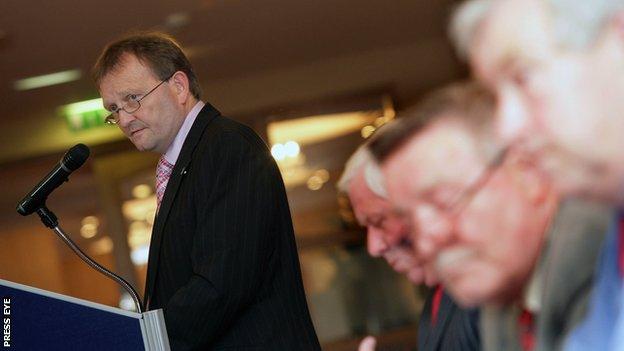 Government money for the redevelopment project at Windsor Park could be in doubt after David Martin's return to the post of Irish FA vice-president.

Martin had been forced to quit in 2010 after the sacking of chief executive Howard Wells cost the IFA £500,000 in an unfair dismissal case.

A suitability assessment was then put in place for senior positions - a move which blocked Martin's return.

However, the IFA later voted to remove the need for such assessments.

Although Martin unsuccessfully tried to regain a vice-presidents' role in October 2011 because he did not pass meet the suitability requirements, he was elected unopposed at a meeting of the association's council on Monday night.

On Tuesday, the Stormont department which covers sport said the IFA's removal of the suitability test was a retrograde step which could breach the £26m funding agreement for Windsor Park.

That is likely to heighten concern among Northern Ireland football fans that the stadium development could be held up. Some NI supporters have recently staged public protests against Martin's return as a senior IFA officer.

A statement from the Department of Culture, Arts and Leisure, read: "The election of officers within the IFA is a democratic process and purely a matter for the IFA. Nevertheless, Government need to be assured that the past failings in governance/accountability within the IFA, resulting in significant financial payouts by the organisation cannot be repeated.

"The IFA had made significant improvements to their governance arrangements following an independent review of governance in 2011.

"However the recent changes to the Articles of Association to remove the requirement for those seeking election to senior positions to be approved by an Independent Commission is seen by the Department as a retrograde step and potentially breaches existing funding agreements between the Department and the IFA for development costs associated with the redevelopment of Windsor Park. This is currently being investigated.

"The Department will consider the levels of risk and apply appropriate measures to protect any current and future public funding that might be provided to the IFA.

"New funding agreements are due to be put in place for the construction phase of the redevelopment of Windsor Park into the new National Stadium once the contractor's procurement process is completed.

"Any funding agreement issued by the Department of Culture, Arts and Leisure will ensure an appropriately significant level of control over the Governance of the Stadium over its lifetime and the suitability of the personnel associated with the project, to ensure that the overall objectives of the public funding is achieved.

"Any funding agreement would also involve significant elements of claw back if the relevant clauses are breached."

David Martin is a long-serving officer of the Northern Amateur Football League which has 94 IFA-affiliated clubs.

He could be a candidate for the IFA presidency in 2015 when present incumbent, Jim Shaw's five-year term is due to end.