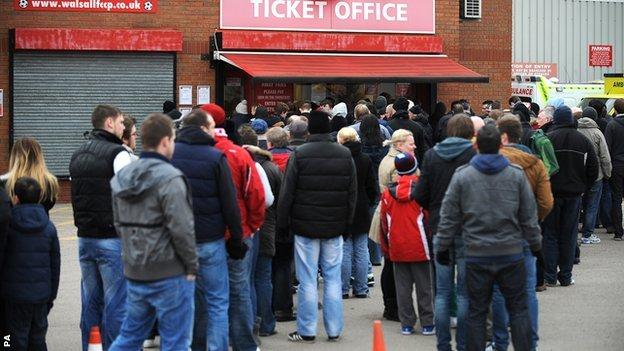 Walsall continue to offer free football for under-18s as they bid to attract the younger generation of fans.

The Saddlers are one of a host of League One clubs who offer junior incentives, the BBC Sport Price of Football found.

Preston North End have handed out 4,000 free tickets this season for children with a 100% school attendance.

Other offers include reduced-rate tickets and family-stand entertainment.

"For us it is about habit-forming and we want it to become the habit to watch Walsall. If you capture a child before the age of eight, that is the team they will support."

At Walsall, fans aged between 12 and 18 can pay £46 for a season ticket and receive £2 cash back on the turnstile at every home game they attend, effectively making it free for someone who goes to every match. Under-12s are entitled to a free season ticket if accompanied by a full paying adult.

"Its success has increased year on year," said club secretary Daniel Mole. "We found we had got an ageing fanbase and the breakdown of season-ticket holders was a very high percentage of fans in their 60s and a very low percentage were junior supporters.

"When we first implemented the scheme two seasons ago, our junior membership increased by 1,000%.

"In the old days, the only way you could watch football was live at the match and the club you supported was selected by where you live. Now you can pick a team anywhere in the country and watch almost all of their fixtures because of television. How can a club like Walsall compete with that? It is difficult.

"For us it is about habit-forming and we want it to become the habit to watch Walsall. If you capture a child before the age of eight, that is the team they will support."

Bradford season-ticket holders can buy season tickets for up to two under-11s for £5; Port Vale, Tranmere and Shrewsbury have family ticket offers and clubs across the division offer other price reductions.

Leyton Orient have given away 2,000 season tickets to students in full-time education, while Preston have also teamed up with local schools.

North End's community manager Andy Haythornthwaite said: "We recognise the importance of trying to engage with the community, because they are at the heart of the club.

"We looked at a way we could support schools' work and as a result came up with the Full House scheme. If a child has 100% attendance, we send them a ticket for a child and an adult to our family stand.

"We have a new family stand, too, where there are computer consoles, face painting etc - we aim to make it a match-day experience rather than just a 90-minute football match. If we are getting the children into the ground, we want to give them something they enjoy and savour and so they come back."