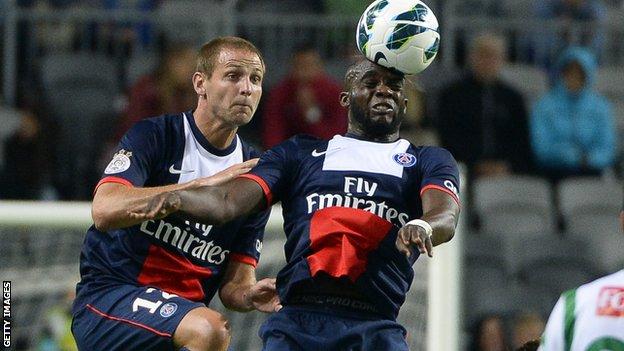 Reading have confirmed they are talking to ex-Liverpool midfielder Mohamed Sissoko after his contract with Paris St-Germain was terminated on Monday.

The Mali international, 28, spent two and a half seasons at Anfield before joining Juventus for £8.6m in 2008 and moving to PSG three years later.

Reading would be able to sign Sissoko outside the transfer window because he is a free agent.

It would boost a Royals squad that has lost Adrian Mariappa and Jimmy Kebe.

Sissoko began his career at Auxerre, but was signed by then Valencia manager Rafael Benitez in 2003 without having made made an appearance for the French club.

In his first season with Los Blancos, he was part of the squad that won the Uefa Cup and La Liga, the last time the Spanish title was not won by either Real Madrid or Barcelona.

After two seasons in Spain, Benitez took him to Anfield and Sissoko became a regular starter as the club won the FA Cup before Liverpool's signing of fellow midfielder Javier Mascherano cost him a regular first-team place.

Surplus to requirements at PSG, he spent six months of last season on loan at Italian Serie A side Fiorentina.

If he agrees to join Reading, he would be their fourth addition since they were relegated from the Premier League in May, following Wayne Bridge, Danny Williams and Royston Drenthe.