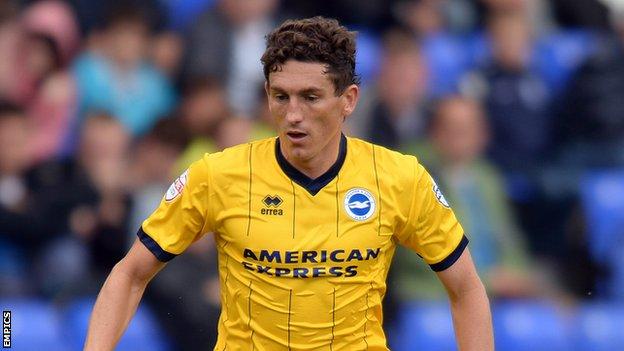 Brighton & Hove Albion midfielder Keith Andrews says they showed character to come from behind to secure a point against Millwall.

Andrews told BBC Sussex: "Each week brings a different test and teams will set up in different ways against you but I believe we have the players to break systems down.

"It is a long, hard season and you need to claw back games like that."

The 32-year-old added: "You are not always going to be at your best and it is very important, on days like that, that you can grind out a result.

"I wish there was another game now we could play and get back playing to how we know we can play.

"But it's probably not a bad thing that we can go back to the drawing board and tweak a few things that we can improve on."

Andrews, who is at the Amex Stadium on a season-long loan from Bolton, praised striker Ulloa for his contribution so far this season.

The Argentine has scored four goals in five league games and the Seagulls rejected a deadline-day bid of around £5m from rivals Crystal Palace for his services.

"He is a handful and has got a bit of everything," the Republic of Ireland international said.

"He is a big player for us at the moment as he is really leading the line on his own. He allows us to bring other players, such as Bucko [Will Buckley] and Ashley Barnes, into play.

"He is very effective and I've seen first hand in training how strong he is and what a handful he is to deal with.

"I have only been here a few weeks but I have been very impressed by the mix we have got in the dressing room.

"It is a good atmosphere and if we hold onto what we have got I am more than confident we can have a very successful season."