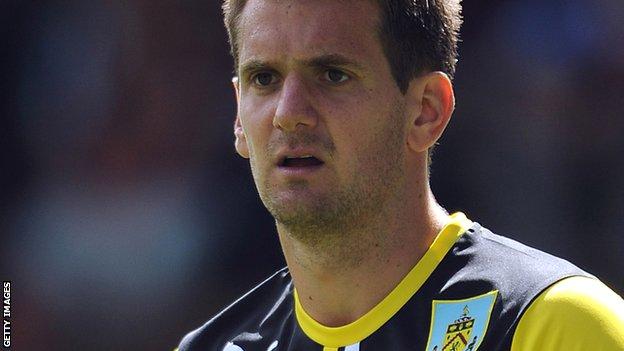 Goalkeeper Tom Heaton hopes the international break will not interrupt the momentum of Burnley's excellent start to the Championship season.

took the Clarets up to third in the table.

Heaton told BBC Radio Lancashire: "When you win [heading into the break] it gives you that positive feeling.

"But it's important we use that and don't take our foot off the gas. It's about progress. We've set the bar high and we keep wanting to raise it."

Sean Dyche's side have taken 10 points from their first five league matches, with an opening-day draw against Bolton and a defeat at Brighton - a game in which Heaton was sent off - the only blips.

After joining Burnley on loan from Stoke, Michael Kightly will hope to reproduce the form he has shown against his new club in recent seasons.

In three career appearances against the Clarets, all for Wolves, he has scored three goals.

Burnley are back in action on 14 September against Lancashire rivals Blackburn, and will be looking for their first win against Rovers since 1979.

"From the moment I set foot through the door, this game has been mentioned and I'm really looking forward to it," added 27-year-old Heaton, who in the summer.

"We haven't beaten them in a long time but we've started really well, there's a good atmosphere around the place and we'll be going all out to get three points. We're confident of doing that."

New signing Michael Kightly, who on deadline day, is expected to make his debut in the local derby.

The 27-year-old winger is well known to Burnley manager Sean Dyche, who took Kightly to Watford on loan in 2011.

"I know Michael well, having worked with him before. He is a player with really good energy," Dyche told the club website.

"Married with that is his obvious quality, both in terms of scoring goals and being a supplier from out wide.

"He has a lot of experience behind him, including games in the Premier League, and is a player I think can help us to progress further as a team."